As a teenager on Vancouver Island, my friends affectionately dubbed me the grandma of the group. I liked my alone time, drank far too much tea, loved a good nap and even got arthritis when I was 16 (premature old person to the max). Unlike most normal teens, I didn't party or step outside the lines too much. And even though there were many perks to living in a small town on a beautiful island (hello, five-minute walk to the ocean), and I liked the quiet grandma-ish life I led, there was still a part of me that felt claustrophobic in a small town.

I longed to get out of my comfort zone and shock everyone who thought they knew me by stepping outside the lines and going away on my own. Travel has the unique power of making people feel unstoppable, or even just courageous enough to conquer their fears. Admit it, we all have daydreams of stepping outside ourselves a bit to regale friends back home with our amazing adventures.

So with that in mind, I planned a solo five-month long university exchange to Hatfield, England, when I was 19. I fantasized about all the people I would meet, the places I would see and the daring feats I would cross off my bucket list.

You have to realize that this would be quite the foray into badassery for me.

One of the big items on that list was a tattoo. You have to realize that this would be quite the foray into badassery for me. One full afternoon of badassery to be exact. Quite possibly some of the baddest assery I’d ever partaken in. This always felt far too rebellious to do back in Canada, but traveller me? She could handle it. I had always hoped that I could be a little badass.

When I flew off to England for my first extended trip on my own, I had an exciting realization: Nobody knew me there. I could wipe the slate clean and be whomever I wanted to be. I could be the cool girl: nonchalant, laissez-faire—you name it—I was going to be it. Fake it ‘til you make it, right?

This dream ended when I had another realization: pretending is HARD. One of my best friends in England later said something along the lines of, “I knew you were dorky as soon as you said you’re from Canada.” (A stereotype I was unaware of!) I later revealed even more true colours when I dusted off my dance moves. Canadianism and bad dance moves aside, being someone you're not is near impossible when you truly like the people you’re with. I quickly bonded with an eclectic group of Brits, French Canadians and Americans. We all loved English Cider, cheeky Nandos and, most importantly, travelling on the cheap. We affectionately dubbed our town “Shatfield” due to its severe lack of anything fun to do. We got out of dear old “Shatfield” as much as we could, touching down on six different countries by the end the semester.

Although my intention of being the cool girl was quickly unravelled, the group of travellers that I befriended inspired me to live out those adventure fantasies that I dreamed up so many months before. And nevertheless, tattoo stayed on my bucket list.

Two months into my semester abroad, my sister was planning to meet me in London where we’d be staying with her friends in the East End, so I filled her in on the scheme that she was going to come with me to get a tattoo in London. She was more than a little taken-aback with my rebellious intentions, but soon enough jumped on board. We snickered mischievously as we sourced out (with the help of my sister’s very tattooed friends) and visited a few tattoo shops.

We ended up deciding on a shop called Shall Adore on the East End of London (which in my mind sounded like a dramatic Englishman announcing the name of a castle: “Behold! The SHALADORE”).

Although the tattoo I wanted—“Have Heart” in typewriter lettering—is far from badass, I was feeling the adrenaline. When the time came, it almost felt like I was breaking the law.

It almost felt like I was breaking the law.

Turns out my tattoo choice was badass. When I told the man at the front desk what I wanted, he got a guy out from the back who asked us “Have Heart? Like the metal band?!” While I definitely did not base my decision on that band (he assured me it wasn’t a neo-Nazi band or anything), I was feeling cooler by the minute.

The artist in charge of my tattoo informed us that he was “Igor from Latvia,” in an epic accent I’ve wished I could replicate ever since.

He got the stencil on my back easy peasy, and, not being able to see it well myself, I asked my sister to double check to make sure it looked good. Igor agreed, saying, “Yes, double check. English isn’t my first language.” If that comment doesn’t scream confidence, I don’t know what does! She assured me that the tattoo was spelled right (after briefly second guessing her own basic second-grade spelling skills), so in my books… there was no going back.

When all was said and done, I got the tattoo, it turned out great and my sister and I got to bond over my brief rebellion. 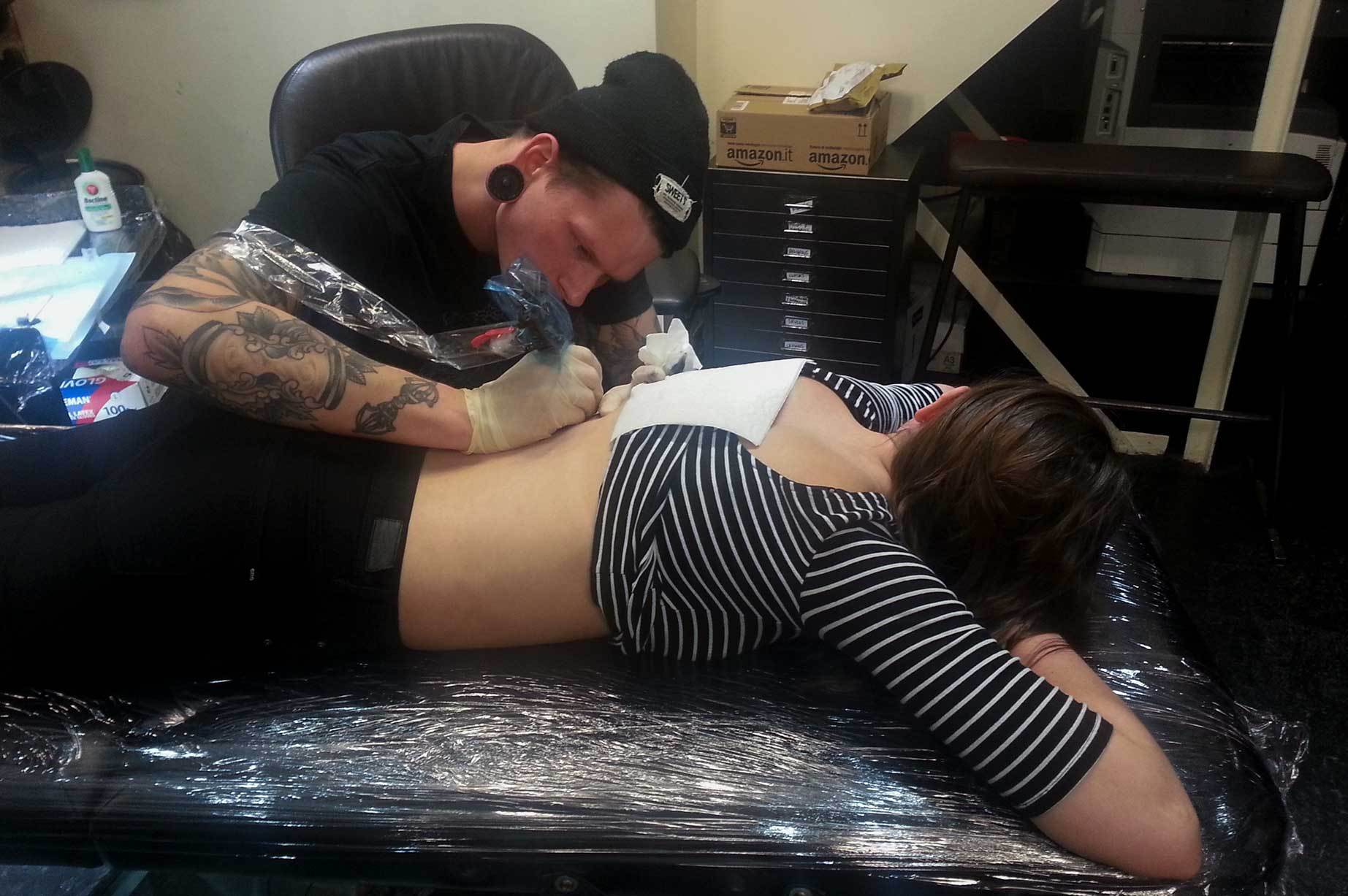 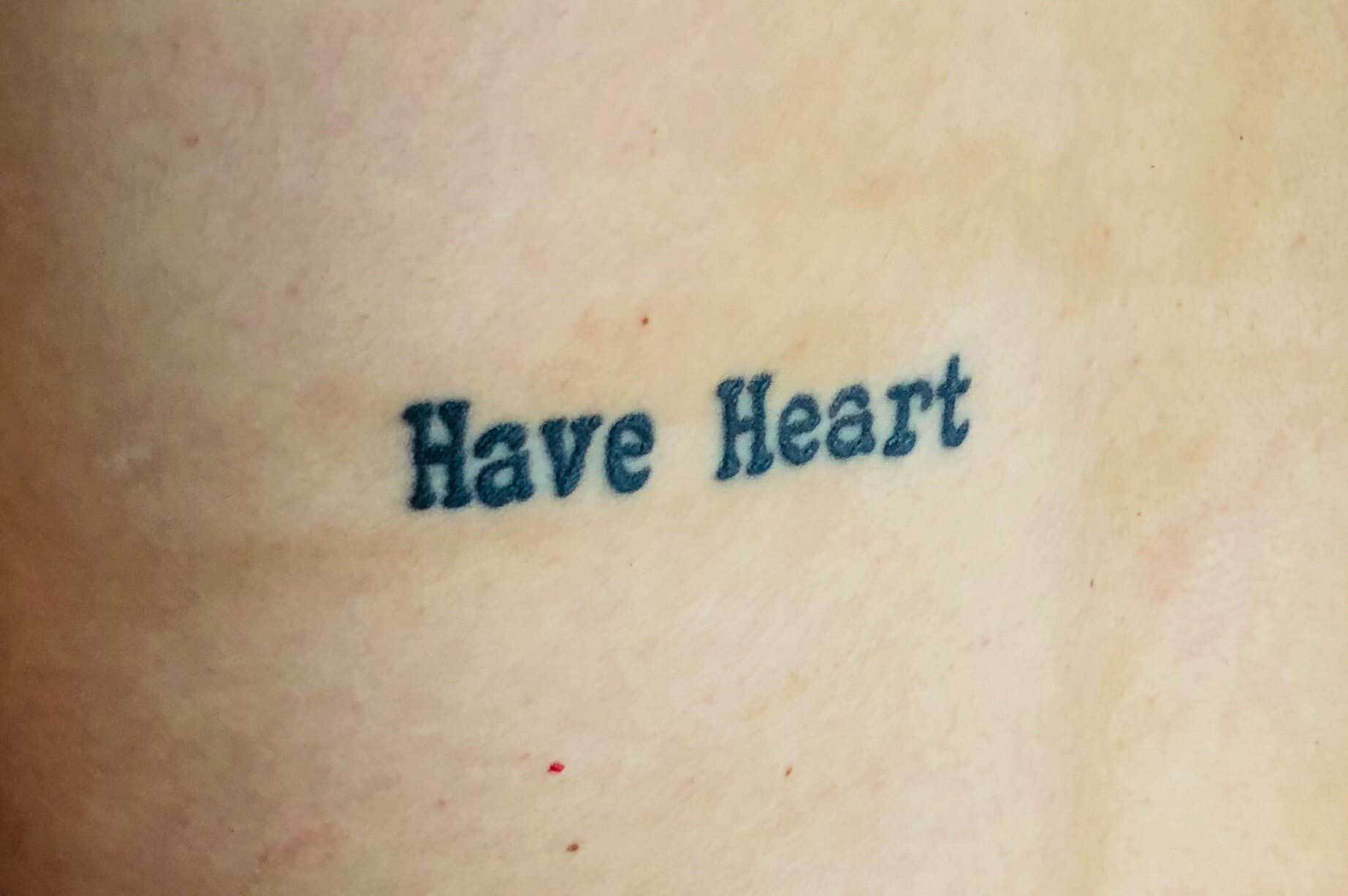 While travelling may not cure your dorkiness (nor should you want it to), there’s just something about jetting off on an adventure that makes you do the things you never felt you could do while in the safety and comfort of your life back home. Isn’t that the beauty of travel though? They say that travelling can be transformational, and it’s true. It just might not always be about the grandeur of the places you see, but the inspired frame of mind it leaves you in. I could have gotten that tattoo back home in Canada, but I didn’t, because I needed to travel to push myself out of my comfort zone and into the frame of mind that helped me feel adventurous and brave.

No, I didn’t come back from England as the badass cool girl I dreamed about. Yet as I slipped back into my quiet West Coast island life, my tattoo became a welcomed (and permanent) reminder of the chances I took while travelling, and how the person I got to be for that one afternoon is just as much a part of me as my love for a cup of tea and a good nap.