Spending my birthday alone on a remote African island

As our plane began its descent, I glimpsed the small island of Sal out my window. It looked like a blob of dirt, harshly outlined by the deep navy ocean, and there wasn’t so much as a tree or bush in sight. “It’s like landing on the surface of the moon, isn’t it?”chuckled the off-duty pilot seated beside me.

Sal was as flat as a vinyl record, and its barrenness amplified how alone I suddenly felt. Travelling solo has a unique ability to make you feel like a powerful badass and a scared little kid at the same time. It felt strange to plan to be alone for my birthday, but travelling full-time also made it inevitable.

This was the first time I was turning a year older entirely solo, not to mention in a foreign place. It didn’t matter how acclimated I was to being alone. Celebrating my birthday without anybody who gave a crap that I was born felt slightly bizarre.

My birthday fell on Easter this year and made flight prices in Europe exponentially higher than usual. While I’d been searching for flights from France—to anywhere, basically—I stumbled on the cheap flight to Sal.

“If I’m spending a couple hundred bucks, I might as well go somewhere cool and farther away,” I reasoned with myself. So I booked it without any knowledge of Cape Verde.

I soon discovered there was only one hostel on the entire island. The middle of the Atlantic isn’t exactly on the well-worn backpacker route.

If I was being honest, I’d only felt so confident going solo because I knew how easy it was to meet people in hostels. But what if Cape Verde wasn’t that kind of place? Or what if it wasn’t high season and I was flying alone to a deserted island?

If I was being honest, I’d only felt so confident going solo because I knew how easy it was to meet people in hostels.

I combed the handful of hostel reviews online, but I couldn’t find enough information to calm my anxieties. My self-assurance as an independent, almost-29-year-old, quickly turned into a bundle of nerves as I left for Charles de Gaulle.

Much too late to turn back, I stood in the dusty breeze outside the tiny terminal on Sal and began to barter with a taxi driver. I forced myself to push aside the anxiety that came from being phoneless, alone and at the mercy of strangers. I exhaled, hopped in and asked the driver to take me to the hostel in Santa Maria.

The cab came to a stop in front of a narrow four-story building. I stepped out, threw my big backpack behind me, slid my daypack off the backseat and handed the driver the agreed-upon amount of Escudos. Then I rang the video-equipped buzzer below the hostel sign.

A young man opened the door and greeted me.

“No stress,” he welcomed me with a huge smile. He drew out the “e” in the middle when he said it again: “No streeeeess.” We fist bumped.

He ignored the usual formalities of checking my passport and taking my money, and instead guiding me upstairs. Outside my dorm room, a group of guests greeted me: “Hey, how ya doing? No stress!”

Before I could introduce myself, one of them asked, ”We’re going to the burger place. Want to join?”’

I hesitantly declined. I could still feel the weight of my anxiety, the plane ride and my backpack on my shoulders. I needed a moment to decompress.

João, the friendly employee showed me to my bunk. His whole no-stress’ shtick had put me at a little more ease.

No one was in my dorm room, so I stashed my bag and climbed the stairs to the common room. Everything was subtly beach-themed with pastel colours running throughout. A guitar sat behind a beanbag chair and album covers hung above the door to the balcony, where a view of the neighborhood could be seen. 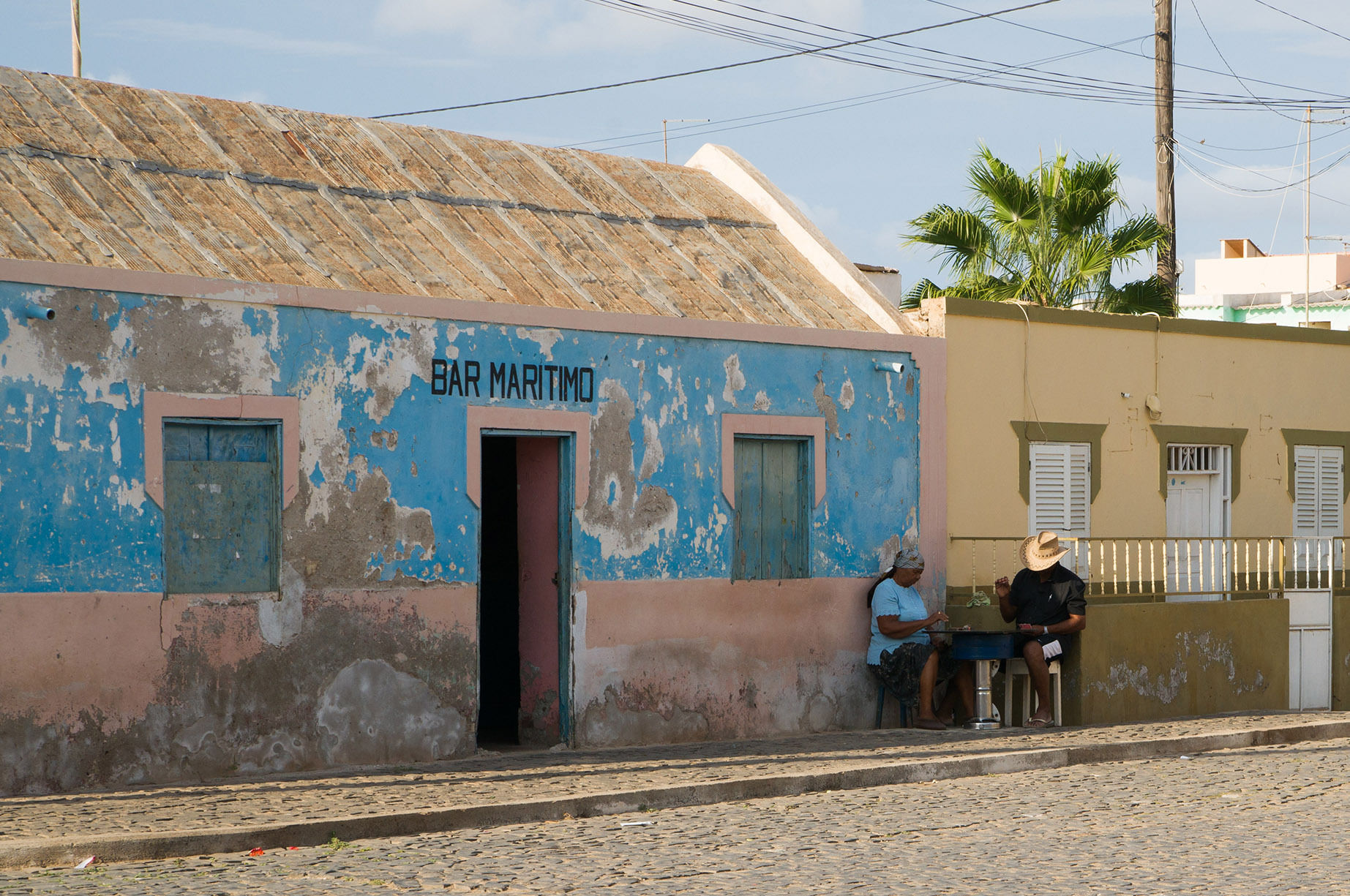 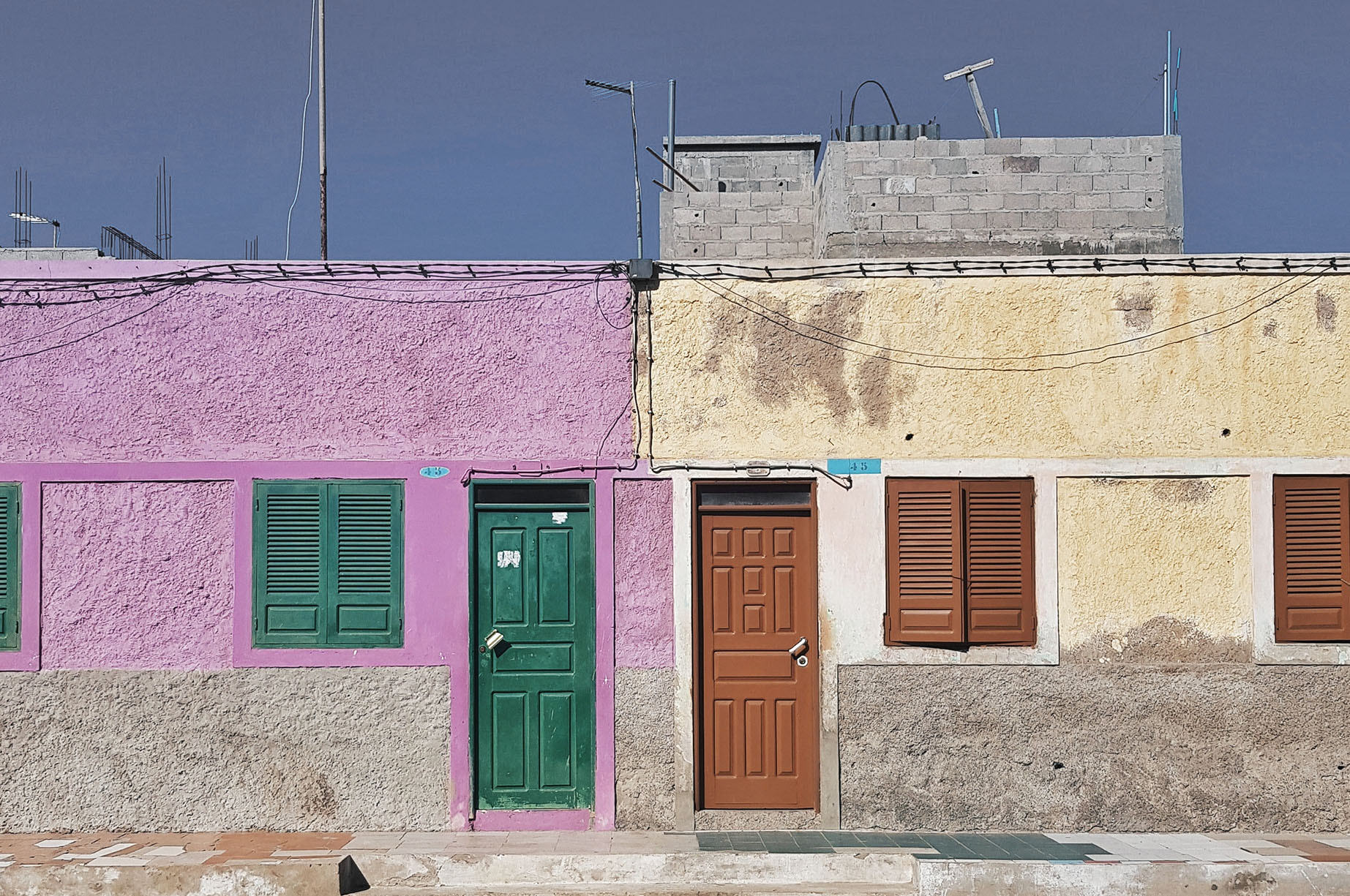 I sat down on the long bench at the dining room’s picnic table, and moments later, two girls came into the room.

“Hey! Are you coming to get something to eat?” one of them asked.

Huge smiles were shining from both of their faces as they bounced towards the door. They spoke perfect English, but I couldn’t pinpoint their accents.

“Sure, I’d love to!” I responded, quickly gathering my stuff as they’d already bounded halfway downstairs. Were formal greetings forbidden on this island?

We were a couple blocks away from the hostel before I learned anything about them. “I’m Zainab and that’s Aya,” the quieter girl told me.

They were both born in Iraq but were raised in Malmo, Sweden. One was a teacher and the other a doctor. They’d been in Sal for a week on vacation together.

We turned a few corners and walked along an empty square. Streetlights were few and far between. The only open stores were mini-markets, where a dozen locals were crowded on plastic chairs watching TV. Halfway down the block was a burger place, apparently owned by Kevin, an American expat who made the best burgers on the island.

I got my first real twinge of excitement as I remembered what it was like to visit new places and slowly learn their quirks and secrets.

I got my first real twinge of excitement as I remembered what it was like to visit new places and slowly learn their quirks and secrets.

Outside the small burger joint, the guys from the hostel who invited me originally were circled around a table finishing off the remaining fries on their plates. Inside, two tables were pushed together and a group of expats and locals were playing a poker game on a beer-covered table. Kevin left his cards face-down to come take our order.

We carried a few chairs outside to join the other group.

I introduced myself and used the opportunity to not-so-slyly tell the group that I came to Cape Verde to celebrate my birthday. The news was greeted by a casual round of, “Oh awesome, there’s always something going on.” It wasn’t very reassuring. I was left mentally preparing myself to be alone the next day, watching the time tick down to midnight as I ate a single cupcake I’d bought for myself, alone on a dark beach somewhere.

I woke up the next day and set off by myself to a breakfast cafe. I spent a few hours on the sand in the hot African sun, dipping frequently in the Atlantic. There isn’t a Crayola color to match the water on Cape Verde. The Caribbean blues were so vibrant that they looked neon.

The jetty was a popular spot with tourists who loved watching as giant fish were thrown from boats into the hands of the fishermen on the docks. Machetes slammed into the wooden planks as the fish heads were sliced from their bodies and tossed back into the ocean. 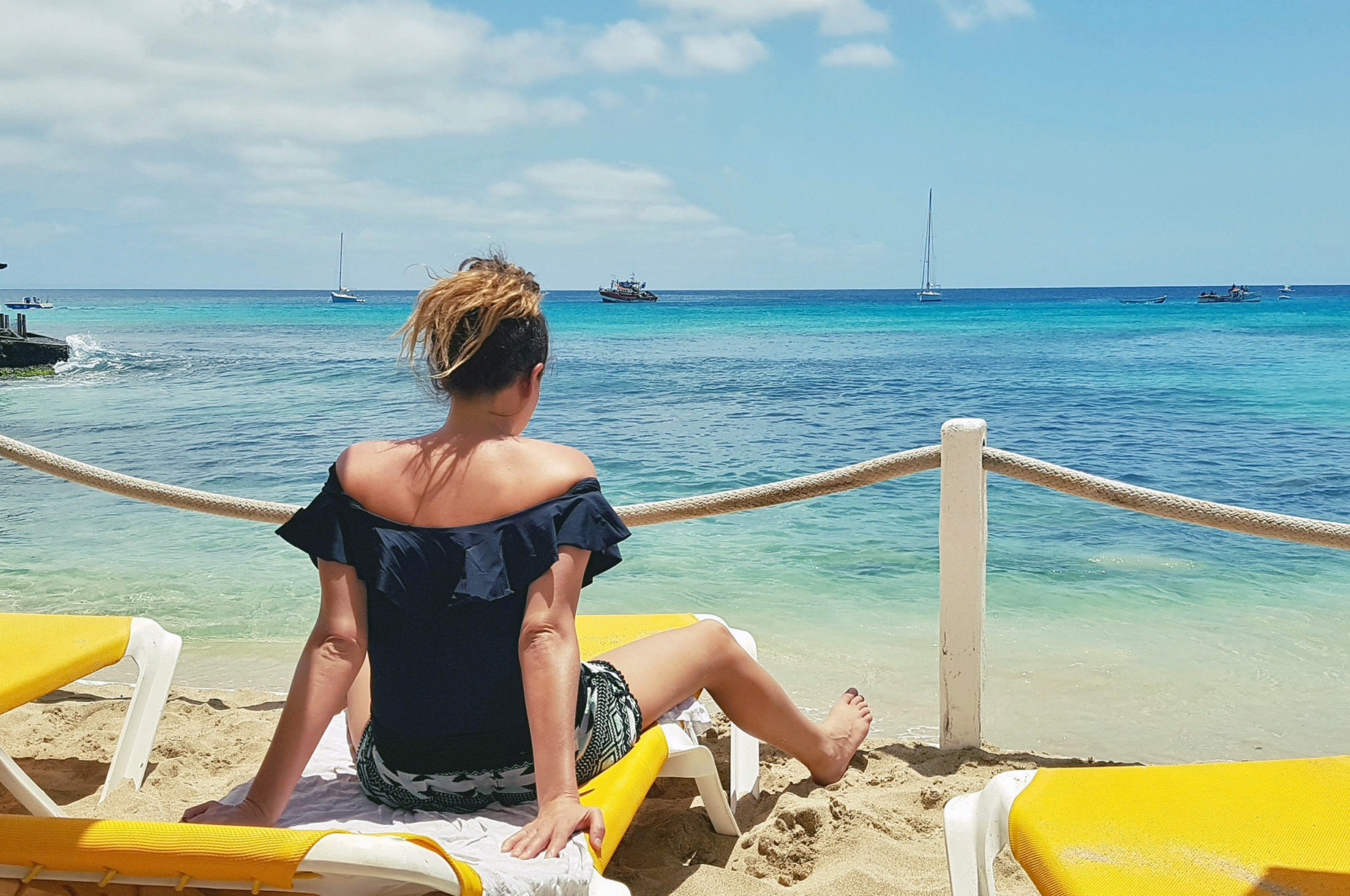 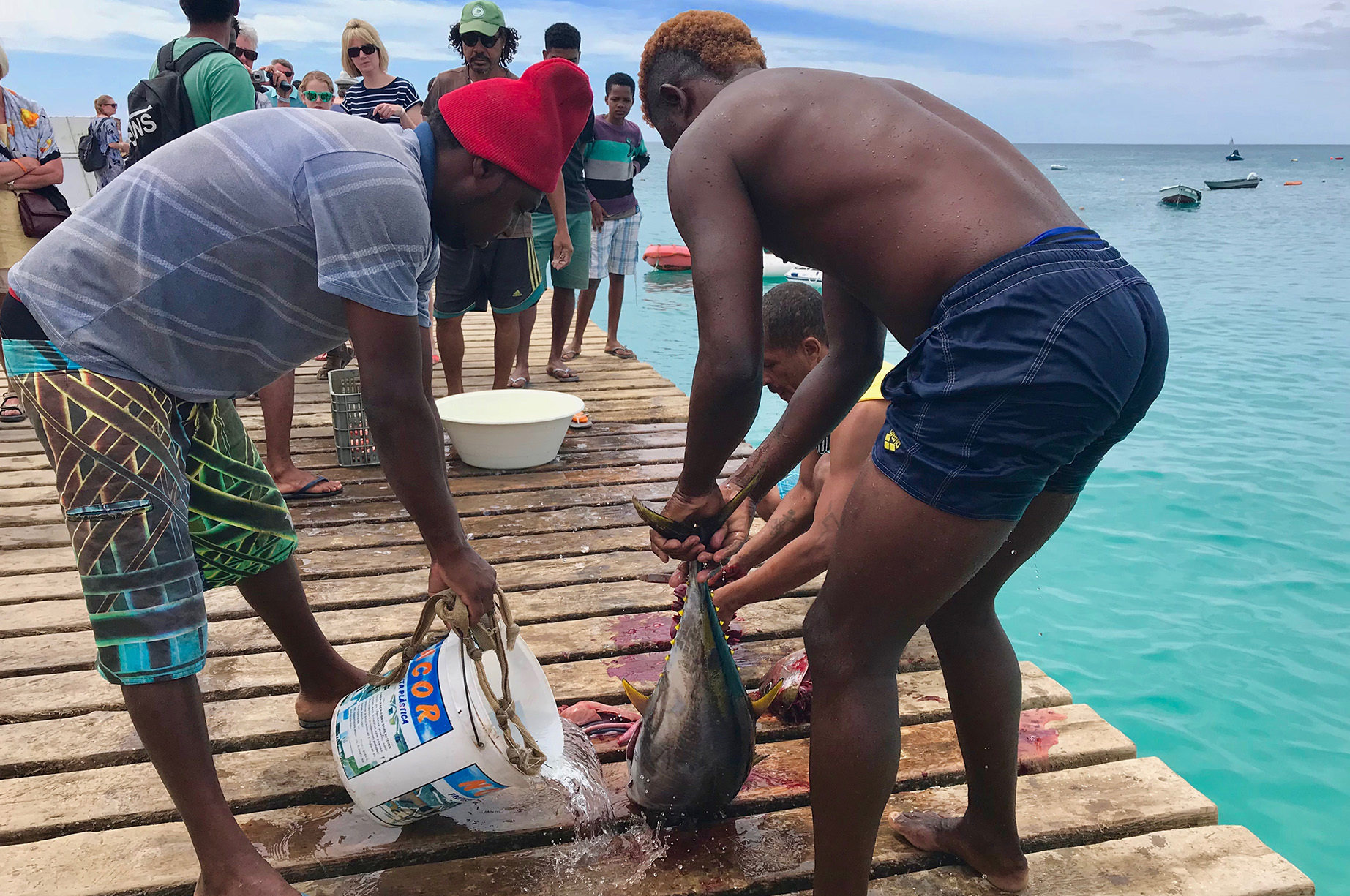 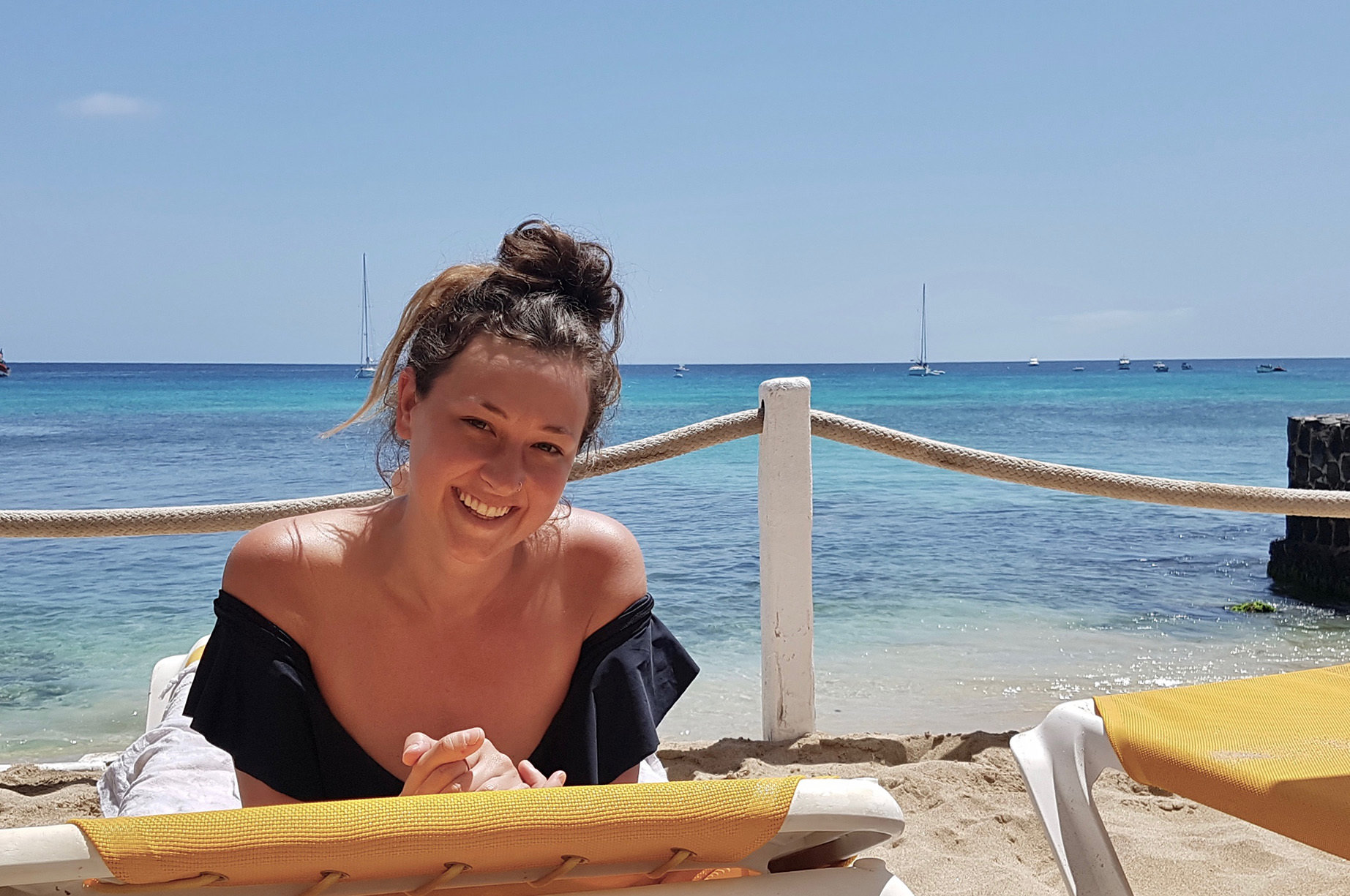 I headed over to the main street. Locals and tourists alike greeted each other with a friendly “no stress” and smiles. Cafes spilled outside their walls, and diners sat with plates full of seafood the local fishermen hauled in that morning.

Melodies were constant on the island. They poured out of shops and cafes and blasted from stereos carried on the shoulders of locals as they set up soccer games on the beach. The music blended in with the sounds of the game and the crashing waves.

It was late before I returned to the hostel, and I had a heart-lurching realization that I should've gone back sooner to make sure I caught everyone before they trickled out to dinner.

To my surprise, fruit and wine sat on the table, waiting to be made into “birthday sangria.”

Instead, I found everyone gathered in the kitchen with lively music playing from a portable speaker. To my surprise, fruit and wine sat on the table, waiting to be made into “birthday sangria.”

By the time we left the hostel, the sky was losing its last light and music was floating on the gusty breeze.

In the cafes, on the streets, at the bars, everywhere you went, instruments were being played and songs were being sung to crowds of people swaying and dancing. Drinks in hand, we joined one of the crowds and our group of mismatched strangers simultaneously let ourselves drift into the rhythms. Not a pinch of insecurity or judgement was in the air.

There was no need for me to check the clock because everybody took turns counting down to my birthday over the loud music. At midnight, two new friends returned from the bar with a shot and a glass of Grogue (the local, rum-based moonshine). They handed me the drinks as everyone sang Happy Birthday.

Between the massive hugs with these strangers-turned-friends, I was reminded why I travelled in the first place: the total vulnerability that comes with everybody being out of their comfort zone on neutral ground in a foreign place. We had an instant connection. Everybody was unabashedly themselves, so every interaction was genuine and pure. (And it didn’t hurt that we were on one of the world’s most stress-free islands.)

I went to Sal alone, but it didn’t matter. It was always in my power to enjoy it. That group of people from all over the world, who happened to also be on that deceivingly barren island, helped me remember what was really important in life.