It’s the night of my 30th birthday and I am in a swamp.

My fingers are crusted in mud, my hair is frizzy from jungle mist, and my knee-high rubber boots squeak in harmony with tonight’s choir of Amazonian crickets. Above me, the stars shine brighter than I’ve ever seen. There’s no light pollution because apart from a few farm houses, there’s nobody for kilometres. “Let’s check this pond here,” my friend ahead of me says. I eye the banks of the murky pond and leap.

It’s the spring of 2021 and Ecuador (where I call home) is about to go into lockdown yet again. By this point, we’ve dealt with restrictions, afternoon curfews, and it’s rumoured that soon, the country will hit us with weekend curfews (as in, no leaving your house from Friday evening until Monday morning). Still, 30 is a major milestone and my friends and I agree that a celebration is non-negotiable. That’s how we find ourselves, grown women, crouched in a pond in the rainforest at 1:30 a.m. covered in mud and looking for crystal frogs. This scene feels more appropriate for a group of 10-year-old boy scouts than three women in their 30s and early 40s on a girl’s weekend. We even have bunk beds.

For not the first time this weekend, a thought crosses my mind. “This isn’t what I pictured I’d be doing at this point.” (Let’s be serious: I’m 30 years old and on a frog hunt in the middle of the night. That should go without saying.) Three years prior to this, I crumpled the metaphorical road map that I had been following and I threw it out. With that in mind, I know I should’ve hit this milestone unphased. But when 30 came, it came mixed emotions.

I felt as though I was falling behind on something I’m not sure I even cared to do.

Both society and pop culture have deemed the big 30 to be the ultimate horror show. In the months leading up, I tried to shrug off the “OMG we’re getting so old!” messages in the group chat with friends from home. I thought about that depressing Friends episode—The One Where They All Turn 30—and put it out of my mind. The same went with 13 Going On 30 and how, at 13, I watched that flick in cinemas wide-eyed as I imagined one day being a 30-year-old big-city editor with flawless clothes. My feelings really were mixed. On one hand, I believe that age is just a number. I believe that your life is yours to live as you wish and that you’re the one who calls the shots. On the other hand, society tends to push a checklist (the one with the wedding, the property ownership, and the ultimate bore: retirement savings). To be honest, though conflicting, I listened to both schools of thought. It’s hard not to.

It was hard not to absorb societal messaging about this chapter when so much around me affirmed that this was how adulthood was supposed to look. When the engagements, weddings, news of home purchases, and pregnancy announcements hit suddenly and simultaneously, it’s hard not to let your confidence be shaken—if even just a little. It was hard not to wonder if that’s what I should be doing or rather, should want to be doing. I felt as though I was falling behind on something I’m not sure I even cared to do. In some ways, it felt a bit like it was Sunday night and I hadn’t bothered to start Monday’s assignment because I didn’t even know it was due.

So we went to the Ecuadorian Amazon. Our weekend started out with a bumpy ride into the jungle. To call the journey “bumpy,” is an understatement: the road to the lodge was barely wider than a single-track hiking trail. Our host dangled out the window keeping an eye on the terrain while urgently shouting directions to our driver. He even carried a machete to whack away rogue plants encroaching on our road. The truck’s doors rattled as we inched our way over rocks, roots and potholes. There we were with our backpacks, trekking poles, and a weekend’s worth of snacks bobbing like bouncy balls on the back seats of the van.

Taking a trip into the Amazon jungle is a mesmerising experience. If you feel like the ocean is vast, try standing on a cliff edge that looks onto a valley with a tree canopy that stretches on towards Peru. This is where the three of us sat as we talked about the important things: how long it would take to summit the mountain that towered over us; whether or not we’d try rappelling off that cliff; which of our ex-boyfriends were the worst; and why none of us thought to bring beers. I looked into that valley and wondered what kinds of wild cats lurked below.

I have a photo of myself on that cliff edge. The jungle mist creates a haze in front of the mountain in the background. The sign next to me reads, “Mirador Cerro Pan de Azucar,” or “View Of Sugar Bread Mountain.” Brazen-headed Amazonian plants hang off the cliff growing at whichever angle they please. I’m wearing my black rubber boots (which hilariously happen to be the first item of clothing I bought in my thirties. Not a swanky dress, not pretty heels, but clompy rubber boots.), a baseball cap, rain jacket, and athletic leggings. I’m smiling. “Things didn’t go as I planned. They went better!” is the caption I wrote below that photo. 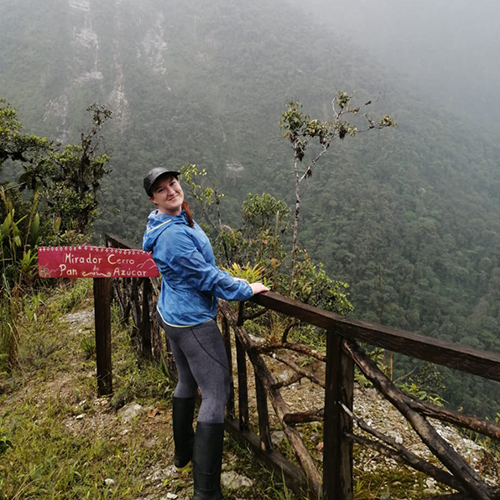 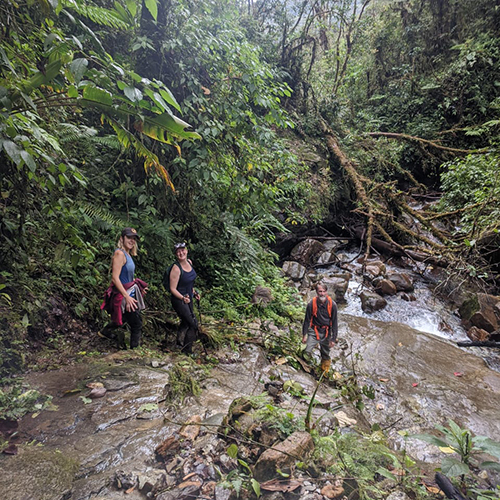 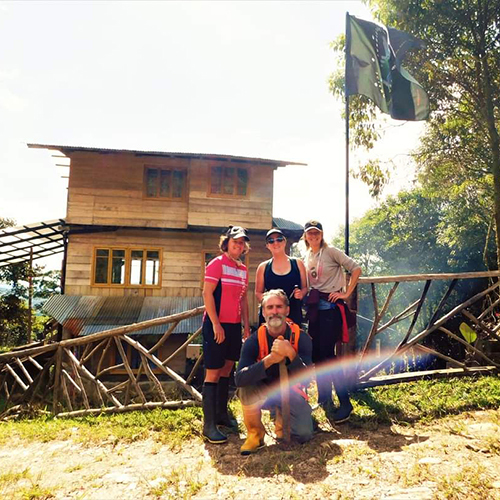 What I’m referring to there, is my life path. Things didn’t go as I planned. At one point, I had planned to work in Toronto and rise through the ranks of the magazine and editorial worlds. I planned to buy a place one day. I planned on an incredible wardrobe and nights in with expensive wine. A decade prior, I would’ve assumed I’d have gotten married in my twenties. I didn’t plan to live in Ecuador—I vaguely would have even known where that was. I didn’t plan on learning a word of Spanish. I didn’t plan on staring at landscapes so beautiful that I wouldn’t have any words at all. A travel-oriented lifestyle piqued my curiosity. In leaning into that, I unknowingly said yes to a lot of things: mountain sunsets, dancing bachata, coffees in colonial plazas, and of course, nocturnal frog hunts.

This isn’t to say that I’m dismissing many of society’s Prized Adult Milestones. Settling down, buying a house (in today’s market no less), having a child, maintaining high-power jobs, or committing to a wonderful relationship are all really admirable, very respectable things.

My point is that they’re not the only things.

And I think that the adulting to-do list could use a little re-writing to include experiences that are worth having just because they are. Immersing oneself in the jungle, pretending to be a kid again, or choosing nature’s elements over responsibility for just one weekend won’t necessarily check any boxes. But it still serves a purpose. I think we tend to ignore experiences like these or push them so far down the list of priorities so that, for many of us, they even never happen. There’s an importance in actually experiencing the world while we have the chance to do so—even if it doesn’t move the needle or contribute to your bottom line.

A year later, I look back on this girl’s weekend with a full heart. We trekked through the jungle to waterfalls, lounged in hammocks, created roaring campfires, bird watched, made peanut butter sandwiches and stashed them in our backpacks to fuel the day’s adventures. It was basically a weekend of summer camp in the jungle. I struggled to come to terms with the milestone, of course, but in looking back, it feels like this Amazon trip was a perfectly-calculated rejection of all that is expected of women in their thirties and beyond. It was a weekend that lacked any indicators of settling down any time soon and was instead the epitome of women doing exactly what they wanted in that moment regardless of the fact that society may have suggested otherwise.