Finding love in a land of fire and ice

Looking out the plane window I saw a land that looked a lot like what I assumed Mars did – volcanic, rock formations and endless ground stretching as far as I could see with nothing around. No trees, no high rises, no busy roads and no malls.

As we descended, I began to see colourful houses sporadically placed close to an unforgiving and jagged coastline and something that looked a whole lot like a lava field. What on Earth was I going to do here for six days?

I had always been attracted to visiting wild and remote places. Ever since late high school I knew I wanted to be exploring the ‘far north,’ where you really learnt how to survive, brave the elements, and make the best of any situation. I knew these places would also bring other people like me, those who wanted to be free, wild and on their feet exploring.

I didn’t know this trip would change everything for me.

This was it. I was in Iceland. The distant obscurity that lay in my daydreams since the age of 16. I had planned this trip well and packed it full of day tours to do incredible things—hike a glacier, snorkel in ice-cold waters between tectonic plates, climb into pitch-black caves and find the entrance to the underworld.

After six days on my own I hadn’t had enough. I was bound to go back to England for a final university exam and I wanted more. The people I’d met so far had been refreshing, exciting and kind. I knew there was a lot more out there, outside of the city of Reykjavik. With some negotiation from university professors, I deferred my exam, rented a car and hit the road alone. Destination: east. Time limit: none.

Fumbling to understand driving on the right-side of the road, I passed through long tunnels and over high mountain passes to get to where I wanted to go. The snow fell hard and I laughed erratically to myself with glee. First stop: Akureyri. Pulling into the small city just below the Arctic Circle, I followed my map to take me to the hostel. My keys jangled as I twisted them in the dorm room lock and I heard a voice on the other side, “Sounds like we have a new roommate.” 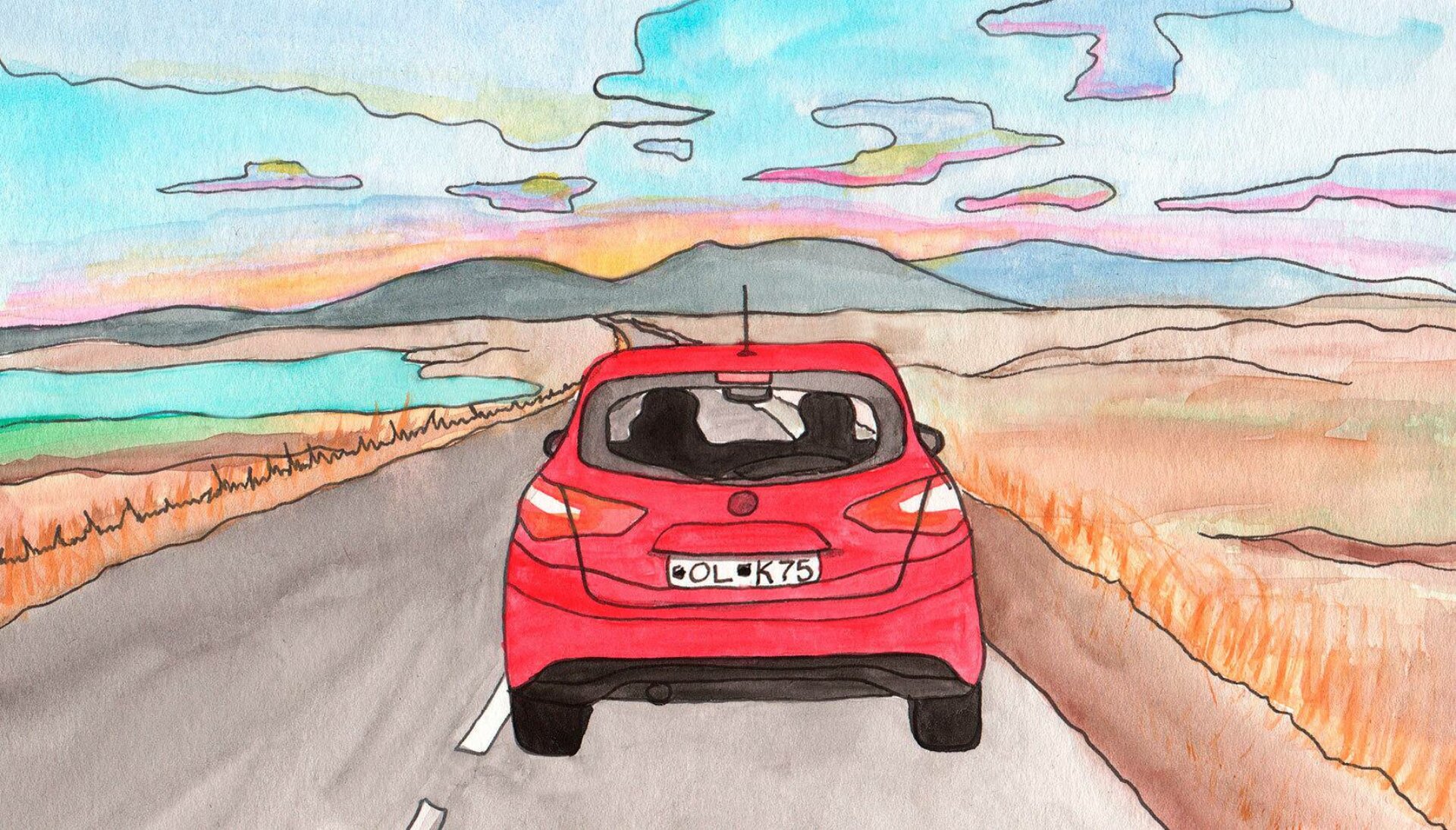 A tall guy with dishevelled brown hair stood up from his bunk and greeted me in the warm room. “Hi, I’m Dan”. He was wearing a fluffy light brown sweater with reindeer prancing across his chest. Handmade traditional Icelandic wool garments are popular tourist items. I would know after all, I had one myself.

Dan was from Nova Scotia, Canada and had been travelling with a friend from home before they decided to go their separate ways. He showed me the pinky finger on his hand and told me of his recent hitch-hiking experience.

The nail was purple-black and bruising quickly. It was a goner, past any recovery. He had caught a ride with an aptly named Icelandic man called Thor, lightning bolt tattoo on his forearm and all. Upon being dropped off on the side of the highway, Dan had slammed his finger in the car door and was left alone in the freezing rain. Deciding to not want to deal with camping that night, he had checked into the hostel.

Snaking our way along the windy highway towards a distant volcanic crater, we stopped off to find a cave by the name of Grjótagjá, with a hot spring inside of it. We dipped our feet in the clear water and they promptly turned red with warmth.

Over the next few days, we bathed in misty waterfalls, skipped rocks on glacial lagoons, watched reindeer bound across fences, meandered along fjords and reminisced about our separate lives with an iPod carrying music from high school.

Within two weeks we’d done a complete loop of the whole country. I’d met hundreds of travellers over my past three months in Europe, but on the first day, I knew Dan was something different. He had a friendly face but a tough story. That was one of the most striking things about him – even though I was a complete stranger, he opened up to me about his hardest times straight away and challenged me to share mine too. It was in this way we connected immediately, by being straight up and honest with each other from the get go. We easily shared our thoughts, woes and celebrations with each other every day in my little rental car. We kept driving and I never dropped him off.

It’s now three years later, and we’re still on a journey together around the world. And it all started with that drive to the hostel in Iceland.