It starts with mint tea: learning to barter in Morocco

In Morocco, most cities are centered around a historical medina, a densely packed, walled district filled with shops, restaurants and homes. When you enter into the dark lair of a traditional merchant in Morocco, there are no set prices. Instead, goods are bartered over a hot cup of mint tea. The experience of haggling for a Moroccan carpet—or any other local souvenir—is almost as exciting as finally taking home your prize.

After our flight landed in Fez, my boyfriend and I hired a taxi to get us to our guesthouse, but the driver didn’t understand where we were going. As resourceful travellers, we turned on the GPS on our phones, switched the language to Arabic and directed him with the best of our ability. The edge of the pedestrian-only medina was as far as he could take us—although it was hard to know if he was lost, tired or just done with our poor directions. We were dropped off and left to find our way through the medina’s labyrinth on foot as the sun set.

Within the medina, it’s a common practice to pay someone to take you where you need to go, which we had to on our first night there. I would be lying if I said I wasn’t nervous. It’s not every day we’re approached by a stranger offering to lead us a down a dark alley in exchange for a handful of coins.

As usual with travelling, everything worked out fine in the end. When we finally arrived at our destination, our hosts greeted us with hot cups of mint tea. Never mind that it was nearly 30 degrees out, the black tea had to be freshly boiled so that heaping spoonfuls of sugar could properly melt. The mint flavour comes not from the tea, but from the fresh stem of mint muddled in as the final touch.

This was our first mint tea experience but certainly not our last.

Although Morocco is highly developed for tourism, Moroccans have deep-rooted customs and traditions that are visible in every aspect of their daily lives. Most Moroccan shops, for example, don’t have set prices. The custom is to haggle over everything, from a tube of argan oil lipstick to a three-day Sahara Desert tour, which can be both exciting and exhausting.

The custom is to haggle over everything, from a tube of argan oil lipstick to a three-day Sahara Desert tour.

Bartering for beautiful goods, whether it’s leather, ceramics or rugs, is a rite of passage when visiting Morocco. My guidebook gave us a cheeky warning: “If you manage to return from Morocco without a carpet, you may as well congratulate yourself on being one of the few travellers to have outsmarted the wiliest salespeople on the planet.”

There’s no browsing in Morocco. Unlike shopping in North America, “Just looking, thanks!” is not an acceptable response to a sales clerk. And you can’t hop around from store to store asking for prices because the moment you do, you’re invited inside for a round of mint tea and polite conversation that can take a while before you’re able to communicate that you’re really not interested in buying anything. Or maybe by then, they’ve managed to change your mind and you actually do want those leather babouche slippers after all!

That day, we set out to buy a carpet. Walking through the medina, we encountered a seller just beginning to set up shop. My eyes wandered, we made eye contact and, next thing we knew, we were ushered inside for mint tea.

Inside his windowless lair, the sales clerk invited us to sit down. It was dark but I could see that carpets and pillows were piled high in every corner of the room.

“You are my first customers of the day,” he said. “It’s good luck to be the first.”

Then, as if he was putting on a performance for us, the carpet seller began pulling out and unfolding individual carpets off the big piles and dramatically flinging them on the ground to show us the patterns. 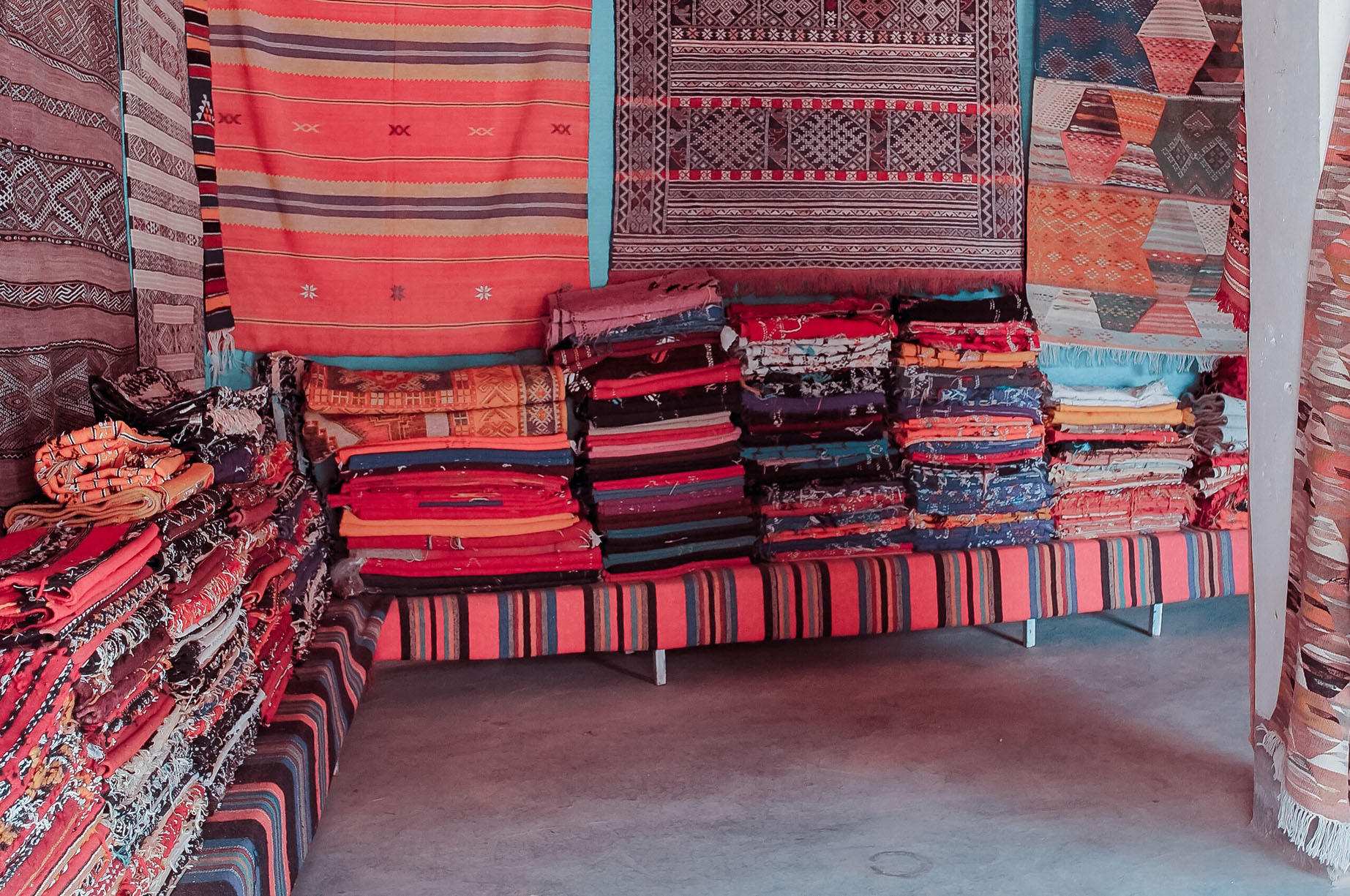 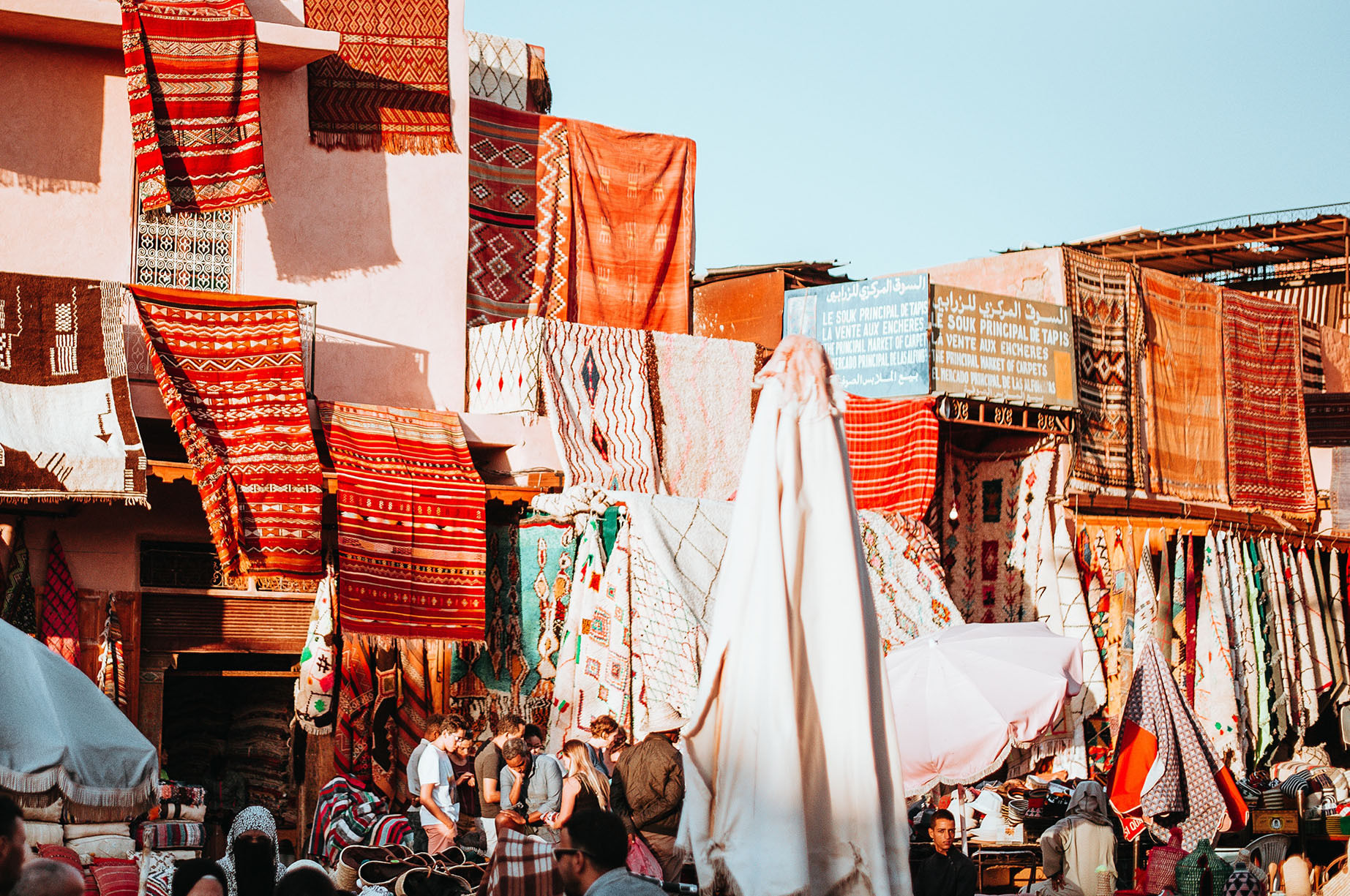 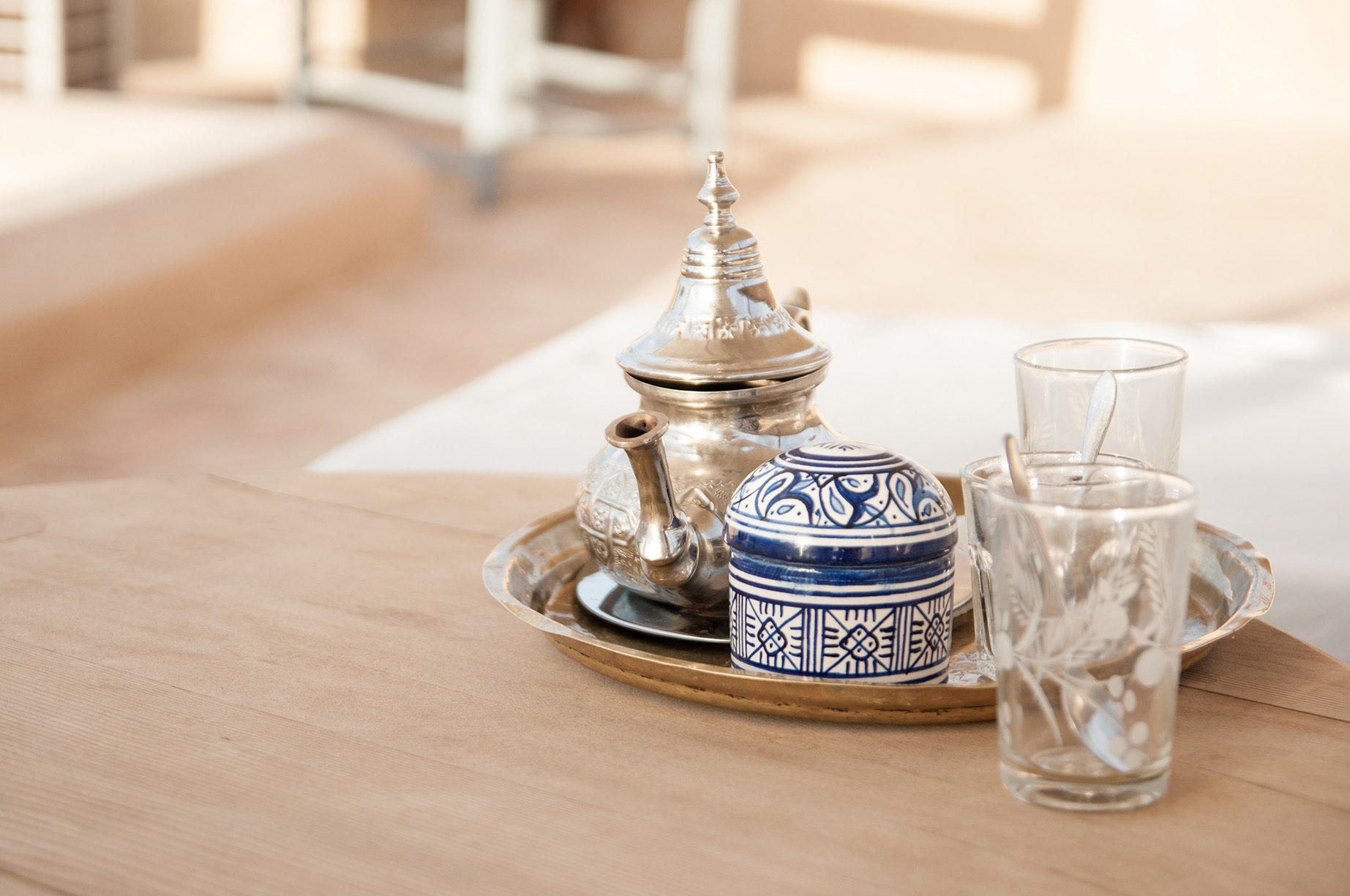 He asked us what colours we liked, how big was our home, which designs we liked most and whether we have friends and family to buy gifts for. He showed us more than a dozen carpets in different sizes, designs and materials, ranging from traditional Berber weavings to the abstract “Picasso” style, and his grand gestures and imaginative storytelling helped me visualize exactly where I could see this carpet back home.

When the bargaining began, the sales clerk started at an outrageously high price of $275 while we countered with a measly $50. We haggled with a calculator between us, tossing prices back and forth until we found common ground.

The whole experience was a bit uncomfortable, but also exhilarating.

The whole experience was a bit uncomfortable, but also exhilarating. It felt like we were playing a game we didn't quite know the rules to, but it also felt like we were winning because he was lowering his price much more rapidly than we were increasing ours. We weren't even sure if we wanted the carpet, but the price kept getting better and better.

Eventually, I took $60 out from my change purse as my final offer, ready for him to take it or leave it. To my surprise, he abruptly stuck out his hand and we shook on the deal. The carpet was ours.

We spent the rest of our day wandering through the medina, wondering if we got a good deal or if we were completely outwitted.

As a tourist travelling through Morocco, there’s no way to assign value to your purchase. You’ll drive yourself crazy trying to guess the “actual” price, but at the end of the day, all that matters is whether the price is right for you.

After exploring the city the rest of the day, we passed by the same salesman standing outside his carpet shop.

“Come look at some pillows,” he said. “Now you will be my last customers of the day. It’s good luck to be the last.”

“No thanks, you already got us on the carpet,” we said in unison, although a second cup of mint tea seemed enticing.

For Moroccans, mint tea is a way of life. It signals the beginning of a relationship but also a thank you at the end of a transaction. It’s a gesture of hospitality and respect. Service owners use it to seal the deal with prospective clients. It’s shared between friends and family, but also strangers.

In North American culture where efficiency is valued, slowing down to enjoy a  cup of mint tea with a stranger might feel unnatural. But in Morocco, time stands still in the lair of a carpet seller. They aren’t in a rush, and neither should we.