Full disclosure: I haven’t been a wild swimmer for all that long. I grew up in one of the world’s largest cities, where opportunities for wild swimming were few and far between. I learned to swim in a chlorinated, tepid local pool and spent my summer holidays in British seaside towns, nervously dipping one toe at a time into the cold Atlantic Ocean. The ocean intimidated me when I was younger—it was inky blue, cold and uninviting. You could say I wasn’t really much of a swimmer.

Canadians, on the other hand, seem to love wild swimming. A Canadian friend recently told me it’s weird I call it wild swimming—that to him, it’s just swimming. Canada has more lakes than all other countries combined (no, seriously), so perhaps this isn’t surprising. In Britain, you’re never that far from water, but those waters aren’t really considered potential swimming holes in the same way.

It was around 2015 when I first noticed that wild swimming was a thing people did. My new boyfriend first mentioned it to me as something he wanted to do more, and it seemed like just what I needed in my life—an adrenaline rush to keep my mental health on its upward swing. It turns out wild swimming is so rare in the UK, there’s almost like a secret club of people who do it, including one “wild swimming club” in my city, Bristol. The informal group of people who do it are adventurers; they're carefree, uninhibited and proud of it. I wanted to be like that, too—to do something exhilarating and new and scary all at once, to feel truly alive. It was then that my lust for leaping into lakes was born.

We stripped down to our underwear and jumped in. It felt like breaking so many rules all at once.

My first wild swimming experience felt pretty special. At a gathering in rural Gloucestershire, my boyfriend and I snuck off and found a clearing that led to the River Wye. It was such a hot day, the water so inviting and clear, that we stripped down to our underwear and jumped in. It felt like breaking so many rules all at once. We headed back to the others, dampness spreading through our clothes and smelling like river water—but I didn’t care. I’d found my thing.

I spent that summer swimming in rivers and skinny dipping in deserted bays in Wales, Devon and Scotland. I started stepping into cold water and letting the adrenaline envelope me. Sometimes with no clothes on, sometimes in my underwear, sometimes in a one-piece that soaked through my clothes for the rest of the day (it was totally worth it, I promise).

It was that same summer when I decided that I wanted to move to Canada.

Two years, a visa application, a lot of emotional goodbyes and almost 7,000 miles later, I found myself in the promised land. British Columbia: a wild swimmer’s paradise. This is the story of my wild swimming summer in BC.

Getting acquainted with Vancouver’s city beaches

I landed in Vancouver completely alone and checked into HI Vancouver Jericho Beach on a day in mid-May that was more hot than warm. I felt extremely far from home. And the next morning, I headed straight for Jericho Beach, a short walk from the hostel.

Maybe it sounds strange that the first thing I did after moving to a brand new city—especially a Canadian city—was go to the beach. But it felt right. I rooted through my suitcase for my swimwear and headed out, towards the gentle lap of seawater that was waving hello.

I’ll never forget the first time I saw the view from Jericho Beach. Vancouver’s unique geography means the beach faces the city’s downtown cluster of skyscrapers and the dramatic mountains that lie beyond them. Stanley Park, downtown Vancouver’s very own forested urban park, sits, invitingly green, just across the inlet. Transfixed by the view, I inhaled the scent of the ocean and knew I was going to like it here.

Transfixed by the view, I inhaled the scent of the ocean and knew I was going to like it here.

My first wild swim in BC was a strange, jet-lagged affair: I belly-flopped into the cold water and starfished on my back, my neck craned to check nobody was stealing my hostel room key. (They weren’t. I don’t think that happens in Canada.) But the swim was also soothing, and I returned to the beach almost every day during my first few weeks in the city. I started to gravitate towards the water whenever I could—a day without a dip felt like a day wasted. My addiction was growing.

I soon discovered that Jericho and Wreck are my favourite Vancouver beaches. They’re slightly quieter and feel more special, somehow. Especially Wreck Beach, which faces west and gets amazing sunsets. It’s also North America’s largest clothing-optional beach, favoured by naturists and hippies alike. You can totally stay clothed if you want to, but there’s something so freeing about feeling the water lap against your bare skin (also, no tan lines)!

My summer was off to a strong start, but I wanted something wilder. I connected with a fellow Brit, whom I’d met at my first hostel, and together we headed to Squamish. It was the first time I’d ever driven on the Sea to Sky Highway, and it truly took my breath away. Squamish is only an hour’s drive from downtown Vancouver, on the way to Whistler, and it’s one of the most spectacular drives I have ever experienced.

We stumbled across Brohm Lake pretty much by accident, pulling over at the first trailhead we spotted by the side of the road. We walked down an easy trail, which ended up taking us around the perimeter of the water. Brohm Lake glistened spectacularly in the sun, deserted except for a few water birds.

We were headed for a rope swing that we’d spotted from the parking lot. It was a 30-minute walk and we were ready to cool off when we arrived. The rope swing was beside a perfect sunbathing rock, but it was the water I was interested in. When I jumped in, it was deep, clear and surprisingly mild. I know water is water, but I’ll never forget my first experience in a Canadian lake. It felt cleaner, more cleansing, somehow, than the lakes back home. 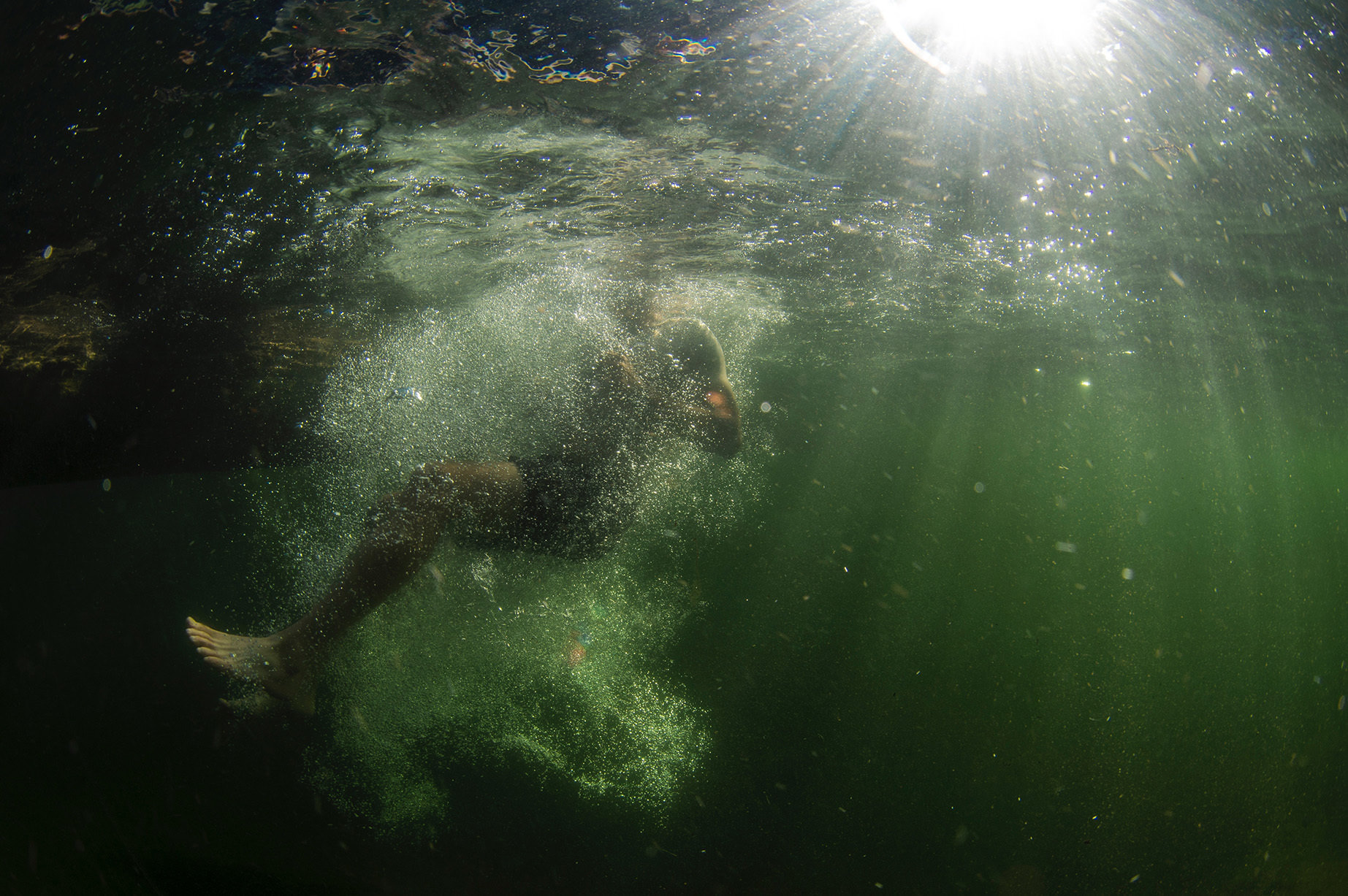 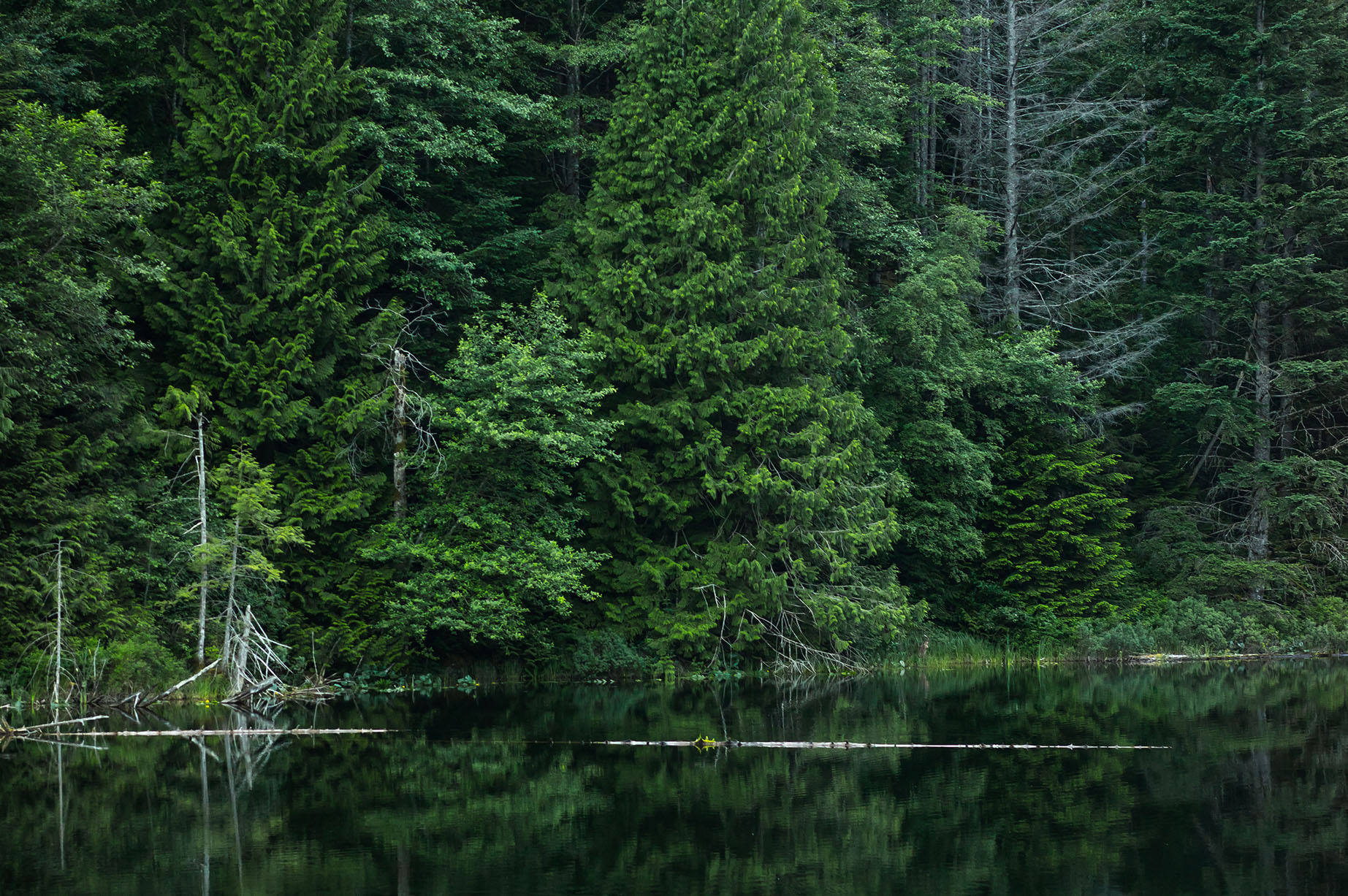 The azure waters of Garibaldi Lake

Brohm Lake was wonderful, but it was nothing compared to this wild swimming spot, which is definitely in my top three of all time. On our hike to Garibaldi Lake, which is a short drive from Whistler, I saw a glacier for the first time. The lake is at the foot of that glacier, and it’s one of the most magical bodies of water I have ever seen. To say it’s blue is quite an understatement. It’s intensely turquoise—a colour you’d expect from Lake Louise or Moraine Lake in the Rockies. It’s also about a four-hour uphill hike from the Garibaldi Lake trailhead, meaning it’s pretty high up in the mountains, and there was definitely a chill in the air. I wasn’t going to let that stop me, though.

Garibaldi Lake was cold, and my swim can’t have been much longer than a minute, but I still daydream about it all the time. I can’t wait to get back into that water again. Garibaldi Lake is usually iced over until mid-summer, which may give you an idea of just how cold it is! But after a hot, sweaty hike, it feels like an almost spiritual cool down.

I’d had a taste of BC’s natural wonders, and I was in love. Some other North Shore beauties I visited and swam in that summer were Joffre Lakes, Alice Lake, Lost Lake, Lynn Canyon and the Capilano River (all wonderful!). 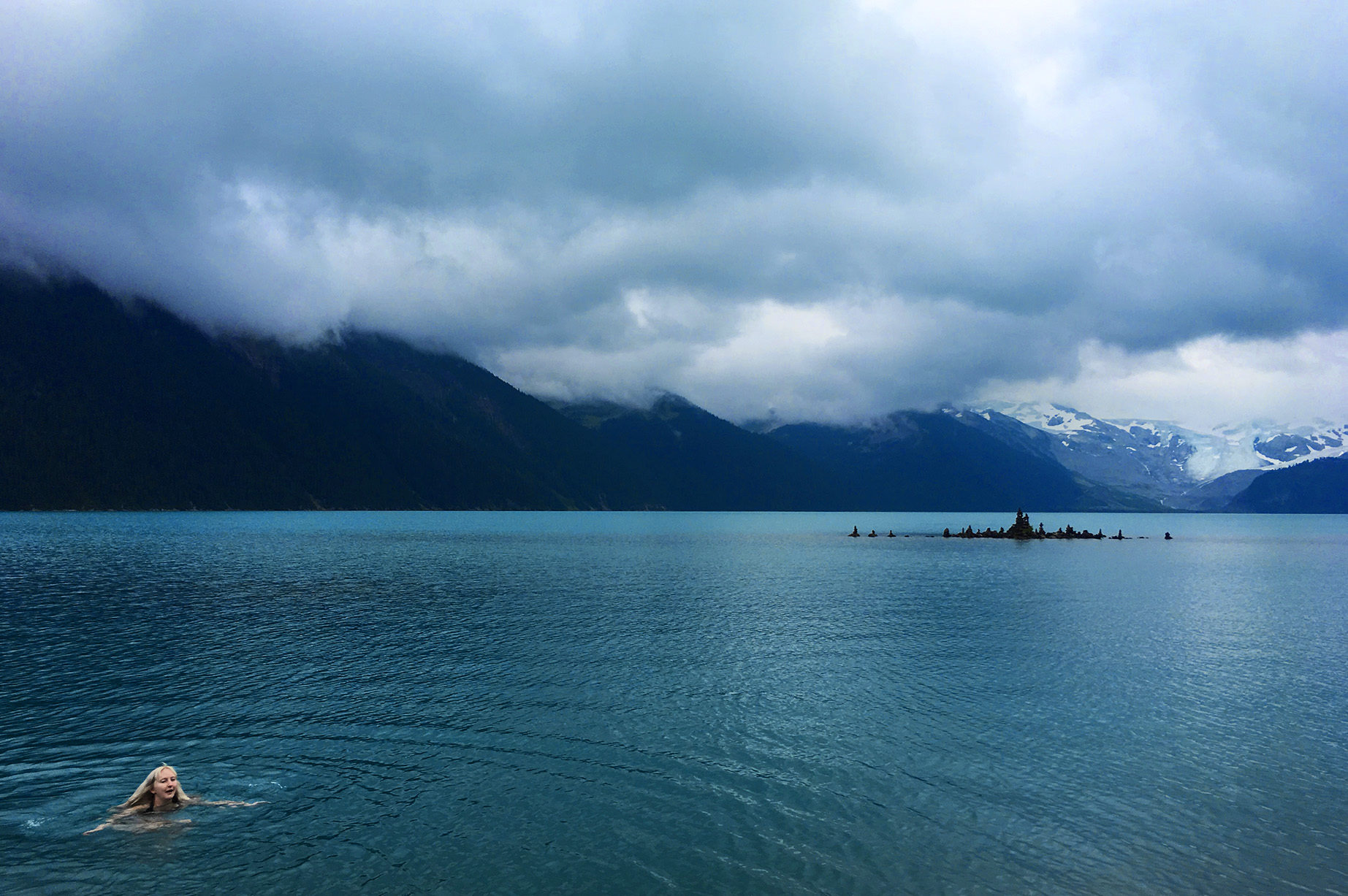 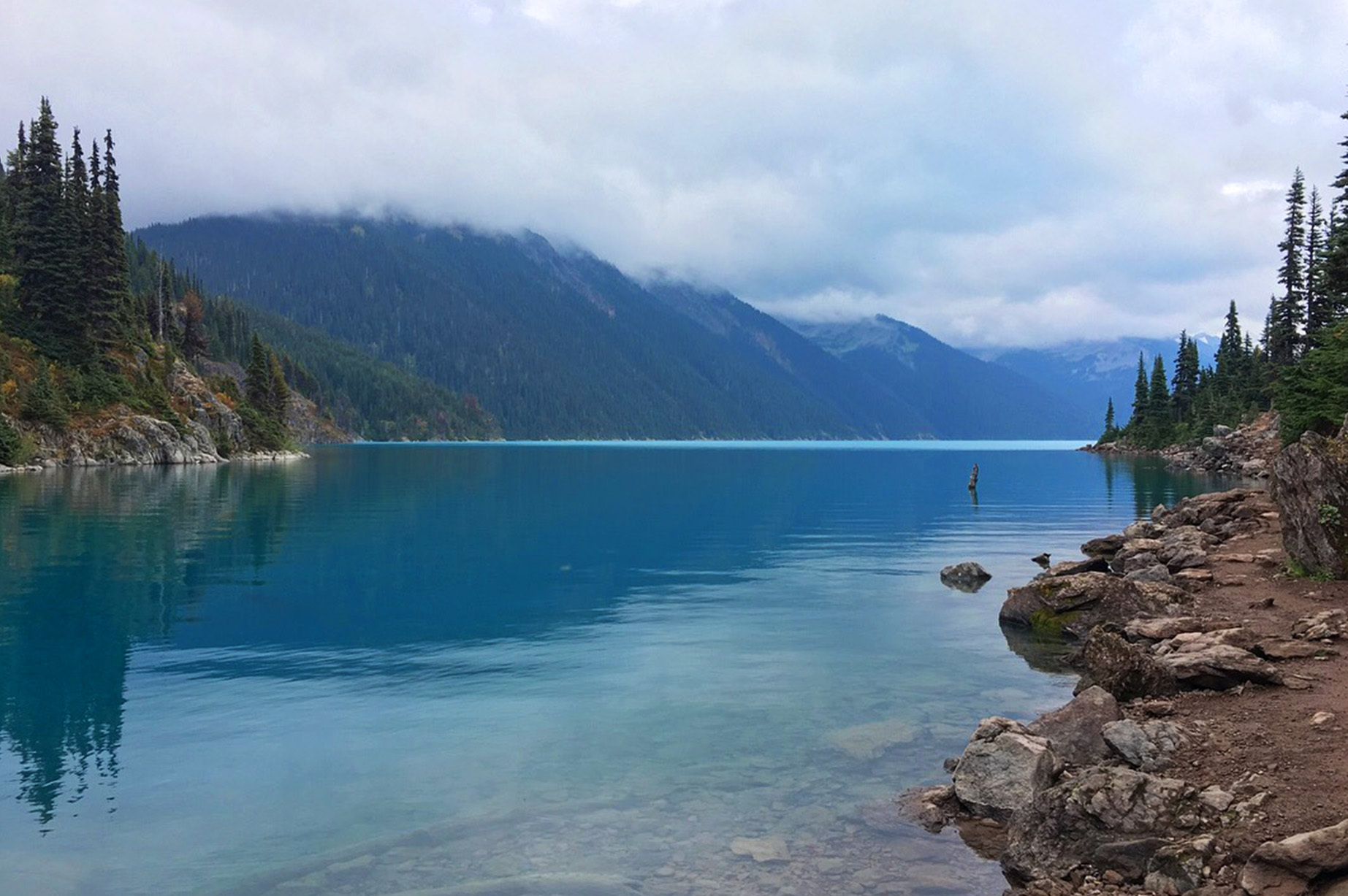 A late-summer dip in Buntzen Lake

I was determined to squeeze as much summer out of Vancouver as I could, and that’s why, in late September, I found myself heading to Buntzen Lake with a swimsuit on under my clothes. Buntzen Lake is so easy to get to, just northeast of Vancouver, but felt as though we were in the heart of the wilderness, surrounded by lush mountains and forests. The day was hot but the water was decidedly chilly.

Best of all, there was nobody else there at all. My boyfriend and I had spent the summer apart, and he’d just arrived in Canada. This was his first foray into the country’s wild waters. We swam to our heart’s content and then lay out on a bench soaking up the last rays of a fading summer.

A wildcard: The Malaspina Galleries

Just a 20-minute ferry ride from Nanaimo, Gabriola Island is a popular spot for artists and hippies alike. A short drive from the ferry terminal you’ll find the spectacular Malaspina Galleries. The second I saw this rock formation on Instagram I knew I had to swim there.

The twisted sandstone of the Malaspina Galleries makes this a truly unique swimming spot that’s worth it alone for the comments your pictures will get! Brave souls jump from the top of the ledge, but it’s completely hollowed out which means it’s easy to take a gentler approach into the water, too.

Heartbreakingly, it was unseasonably cold when I visited—too cold for even me to swim. But I dipped my toes in (and nearly froze them off), and promised myself that I’d go back and tick it off my list soon.

My summer was spiritual, extremely fun and cleansing for my soul. I hope it’s inspired you to take a dip whenever and wherever you can.