Some clichés never die. When people think of Canada, they sometimes think of Revenant-style bears or herds of cuddly Bambis prancing through the forest. Luckily for all the animal lovers out there, there's some (and I stress some) truth to those clichés. You might just have an epic wildlife encounter during your next trip across the country. Here's a look at some of the creatures that may cross your path.

Deer aren't quite as cuddly as Bambi might lead you to believe. They can weigh between 300 and 400 kg, and can grow to up to 2 metres tall. Despite their massive size, they do tend to move soundlessly. If you want to meet one, you have a good chance near lakes during the hottest days of summer. There are 3,000 deer currently living in Algonquin Park, Ontario. If you are less adventurous, you can see lots of them from the comfort of your car at Omega Park, between Montréal and Ottawa. Alternatively, you can travel east to Newfoundland, where they were introduced into the ecosystem by humans and now abound.

The caribou is the star of Canada's quarter and a real winter-survival machine. Their hooves are similar to snowshoes, which makes it easy to walk on top of the snow, and the female (the only female deer that grows antlers) can interrupt and postpone its pregnancy for up to two months. In the summer, caribou can run for hours and up to 70 km/h, just to avoid mosquitoes. The last big herds of these magnificent beasts live up North (where Santa also lives… coincidence?). Smaller ones still live in Algonquin Park, at Park Omega, in Newfoundland and in Gaspésie. 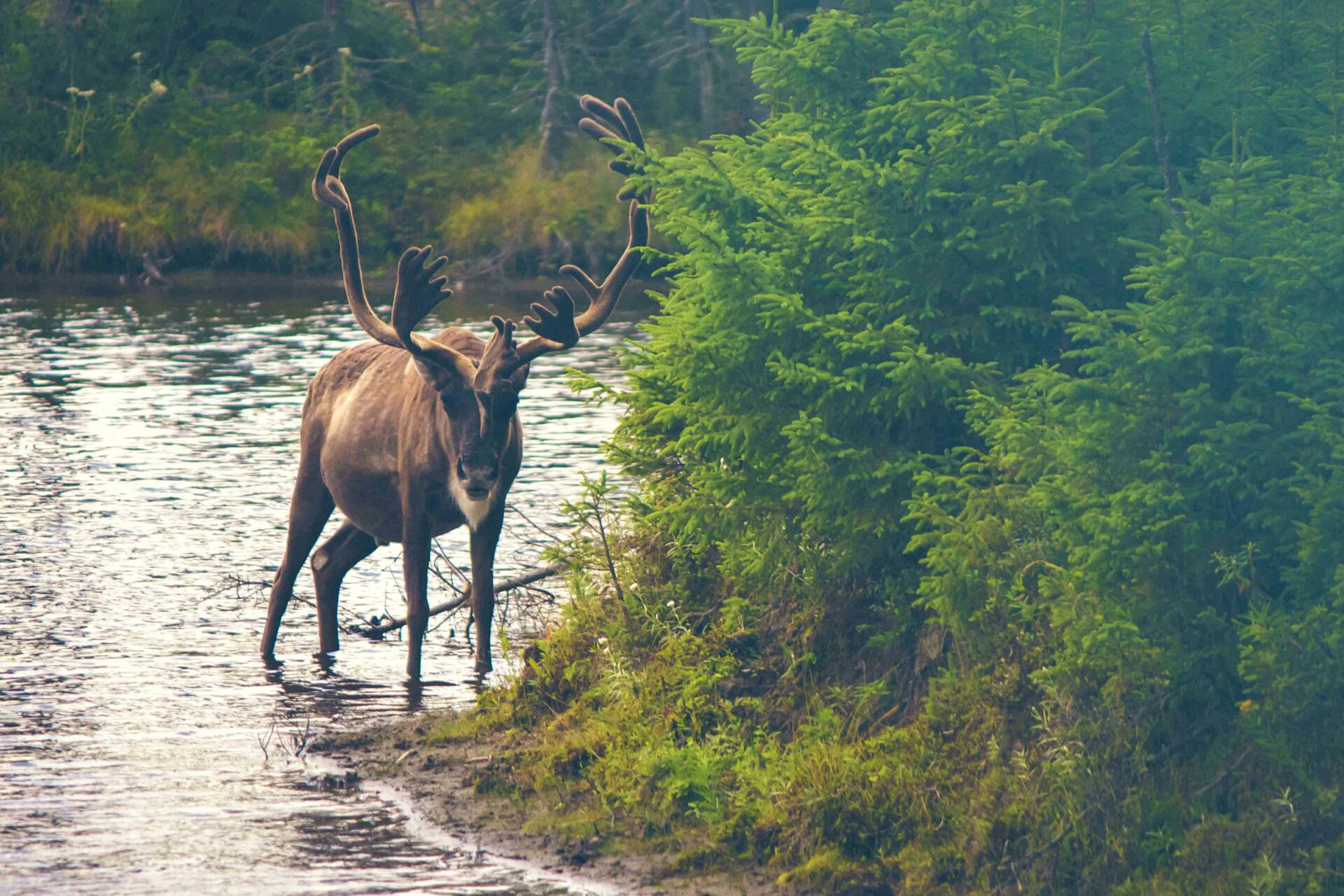 Grizzly bears and black bears (which, you should know, are not always black) are similar in many ways, but also quite different. The former is the second largest carnivore on the continent, grows up to 1.8 meters tall, and is second only to humans in the food chain. Grizzlies live in the Rockies, in Alberta and in British Columbia. Black bears, on the other hand, tend to be smaller and are said to be among the most intelligent mammals on the planet. They can live just about everywhere on the continent, and their hibernation capabilities are the envy of every backpacker. A black bear can stop eating, drinking, urinating and defecating for the entire winter. Who wouldn’t sell his soul for this gift during a long bus ride?

There are also various additional physical differences between the two types of bears, which you shouldn't stop to ponder if you're ever faced with one. However, they are worth reading about. Both animals can run up to 55 kilometres per hour (no, you cannot go that fast, even with an adrenaline kick), but the black bear can also climb trees and stand on its two hind legs. The grizzly cannot. Fortunately, the brazen grizzly would be the one more likely to attack humans, but unfortunately, it’s not advised to run away from one (not even to climb a tree), because in grizzly language that would tag you as a prey. To avoid becoming part of a meal, hire a guide and try to see the grizzly from afar, either near La Malbaie, or in Western Canada. 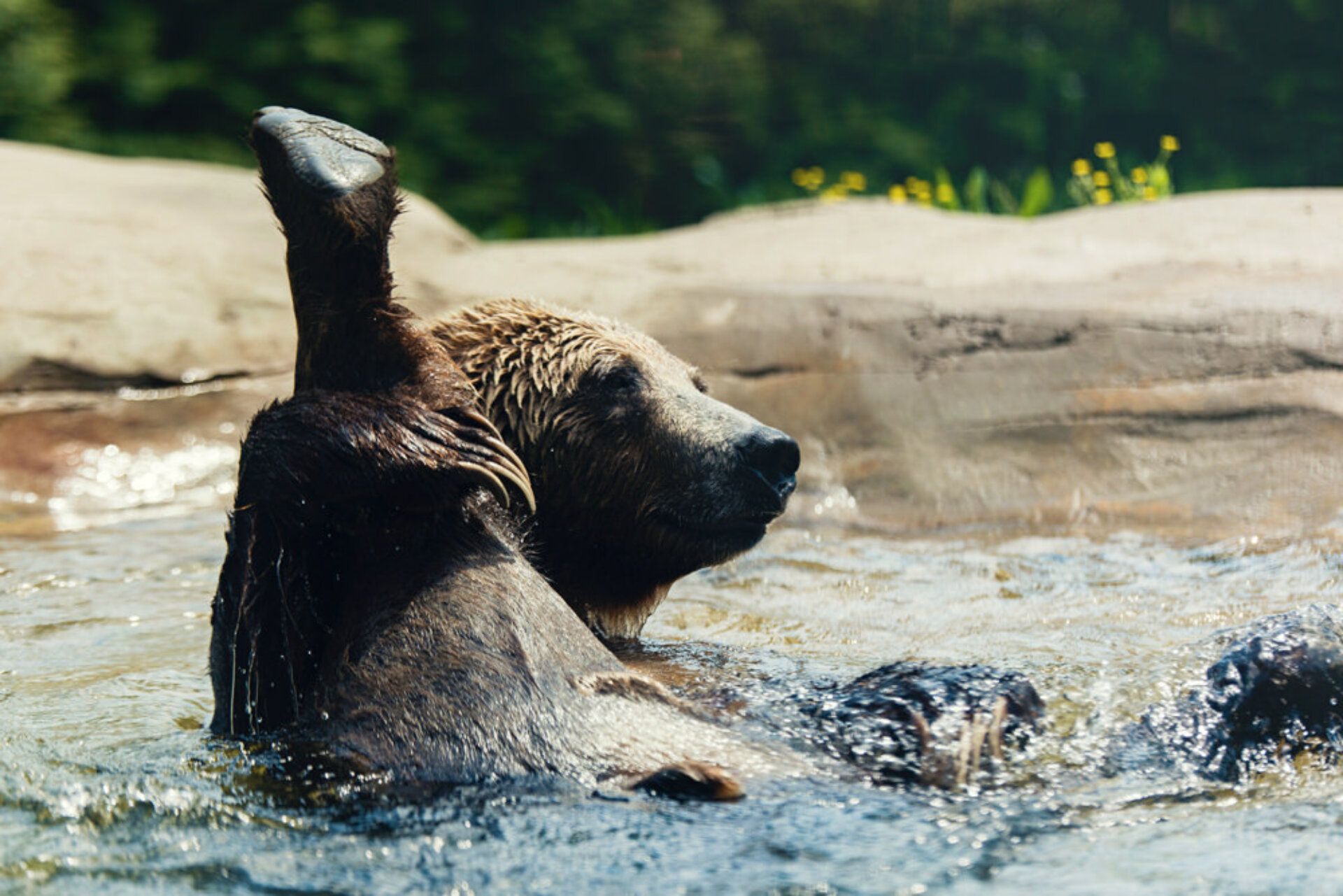 Does too much green give you nightmares? Many animals share the same day-to-day spaces as humans in our cities. Each urban park has its marmot, but Jean-Drapeau Park in Montréal has dozens of them. Many raccoons also boast Montreal postal codes, particularly at the second viewpoint on Mont Royal. No need to endure a night camping and cry over a destroyed bag of groceries left outside to see these little masked bandits, you can walk up the mountain!

"Locals don't usually get involved in any of this."

The most emblematic animal of our cities, because they're everywhere, is the notorious squirrel. Big fans can be seen tracking them like Pokemons, with smartphone cameras in hand. The grey ones roam Montreal, the black ones are all over Ottawa, most brown ones live in Toronto, and red ones can usually be found in the woods. Not to mention the few albino squirrels that live in undisclosed locations. Please note: catching any of these on camera while walking the streets will instantly mark you as a tourist. Locals don't usually get involved in any of this. 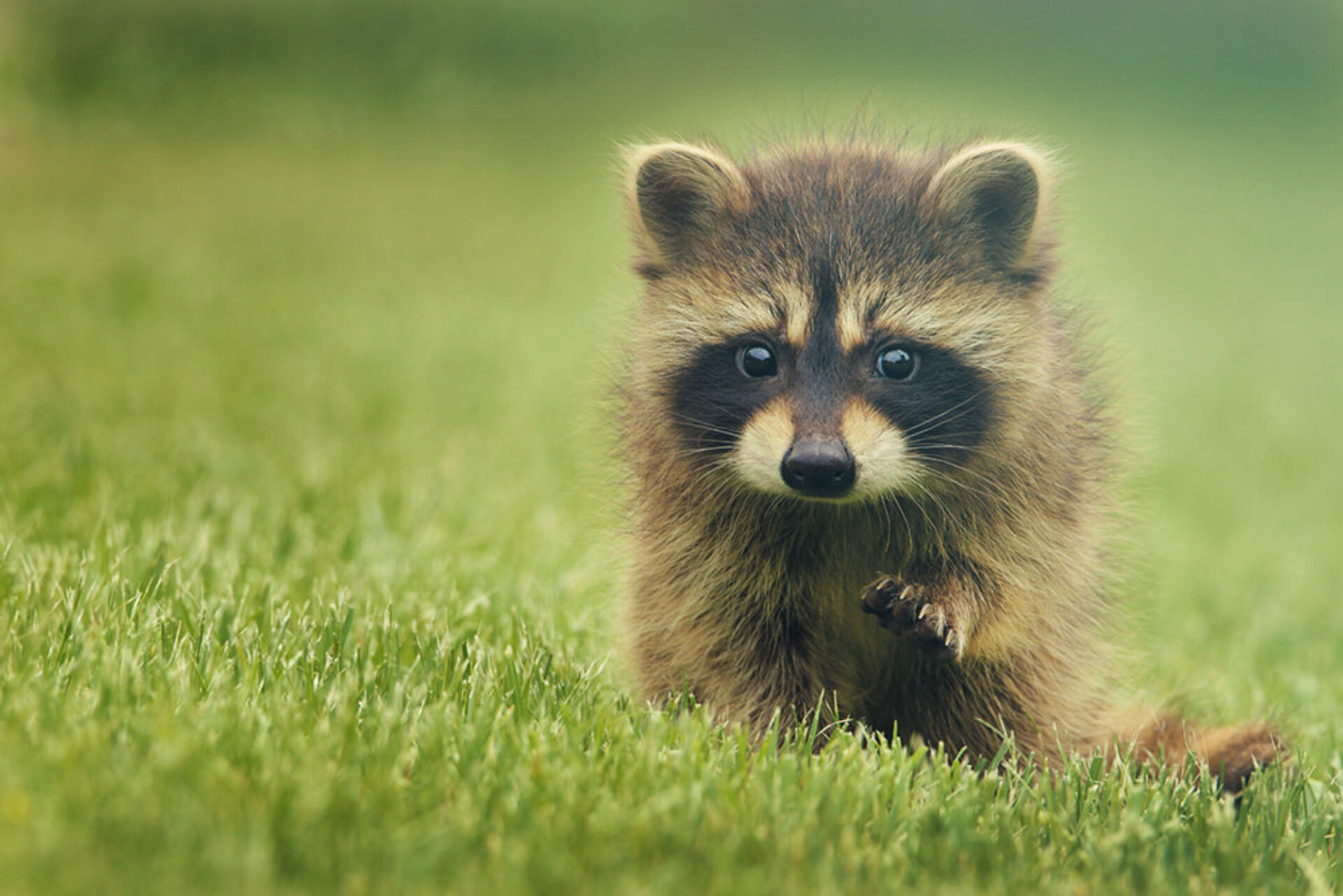 KING OF THE PRAIRIES

Before the arrival of the Europeans, there were roughly 50 to 70 million bison roaming the prairies of the Americas. By the end of the 18th century, there were less than 400. A first attempt at saving the species increased its population to half a million! Now, bison run free in several areas far from urban hubs.

Fun fact: during courtship, the males, which can weigh up to 1,000 kg, fight each other covered in their own urine. They are also a species known for exhibiting homosexual behaviour. Intrigued? Bison can be seen at Elk Island National Park - 45 minutes from Edmonton, at Prince Albert Park - over 4 hours drive from Regina, or at Wood Buffalo National Park - 11 hours from Edmonton. In other words, if you get carsick, you should focus on other animals. 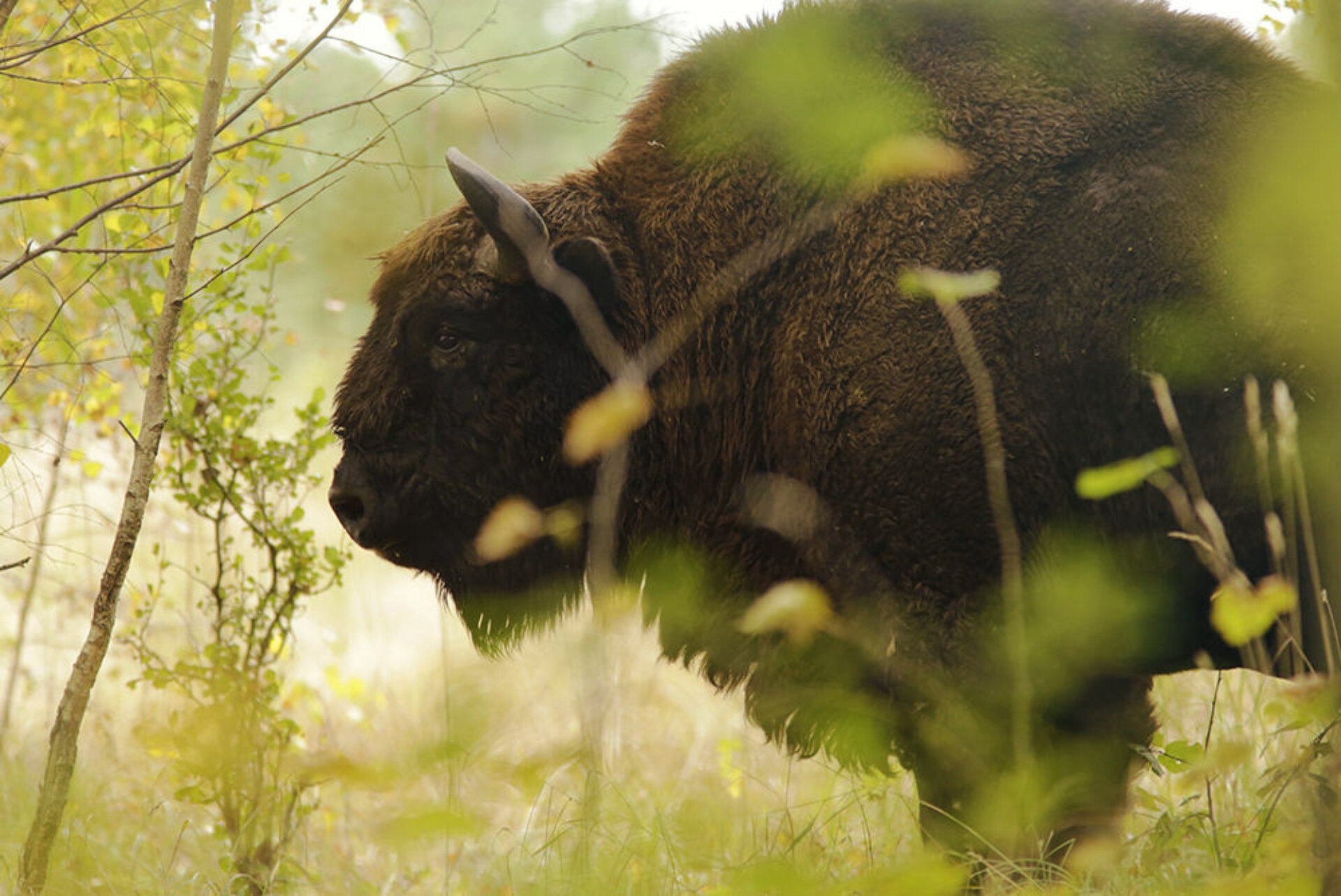 Canada's mightiest cat, the cougar, is also the most difficult to spot. It has presumably been extinct from Eastern Canada for the past century, but some rare sightings have been reported in Quebec and Ontario. Vancouver Island, on the other hand, is home to three quarters of the total 3,500 cougars in British Columbia. The cougar prefers to stay far from humans, which is probably a good thing for everybody. To see one, your best bet is at the Toronto Zoo or the zoo at Saint-Félicien, where the humans are in cages and the animals run free.

The lynx is not an endangered species like its cousin the cougar, but it is mostly nocturnal and discrete. Your best chance of spotting one of these fury cats is at the Biodôme in Montreal, where a kitten was born in 2012! 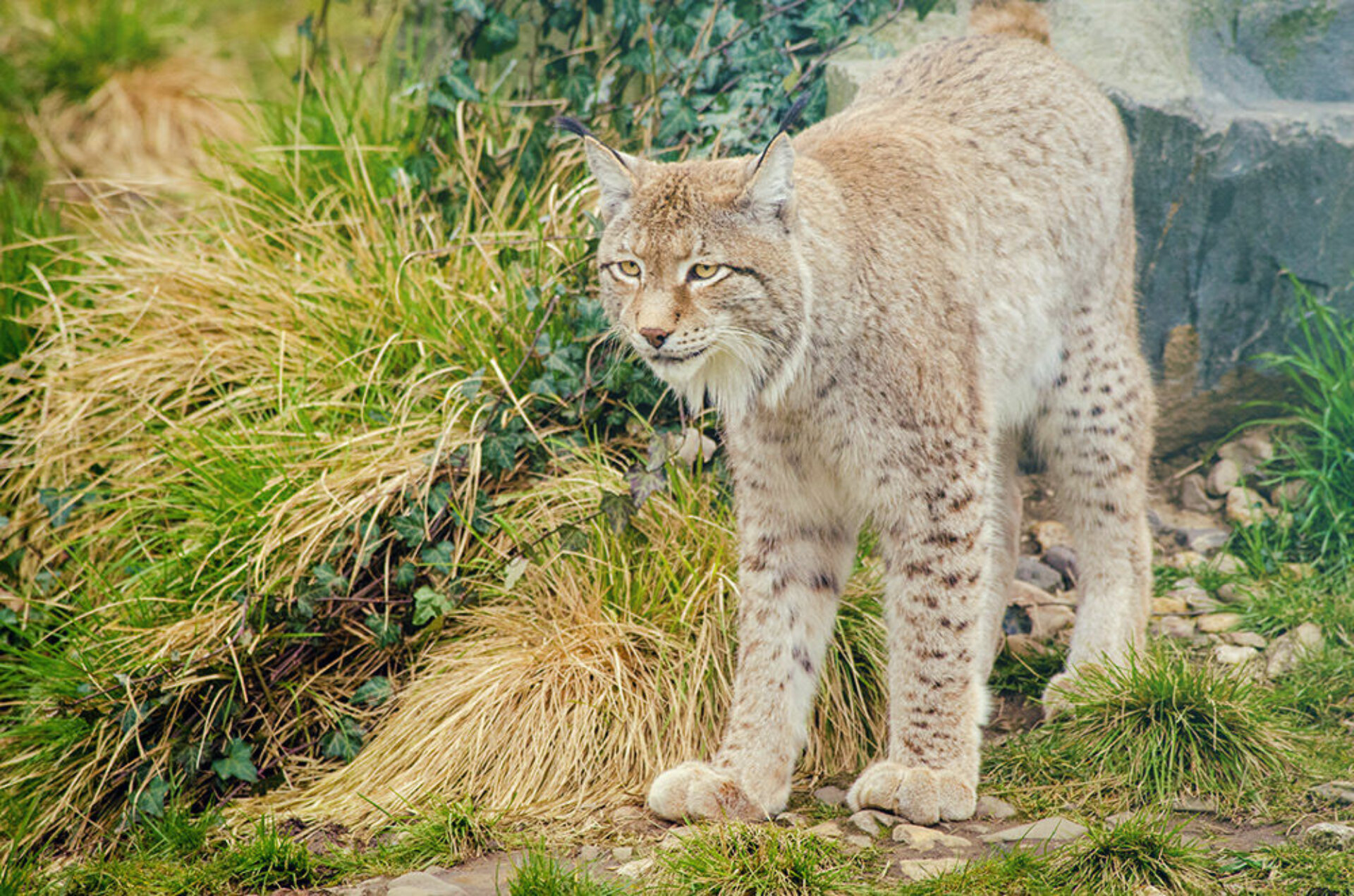 Whales impose a respect that very few other animals can demand. In the Maritimes, they spawn at Cape Breton and sometimes jump over boats or show off their tails along the Cabot Trail. In the province of Québec, Tadoussac (easily accessible from La Malbaie) is the whale capital of Canada. Right where the Saguenay river meets the Saint-Lawrence, there is a lot of food that attracts these venerable ocean giants by the dozens. In the West, you can take a boat from Vancouver or Victoria for a chance to meet a legendary orca whale and even pretend it’s your childhood hero, Willy, finally free. 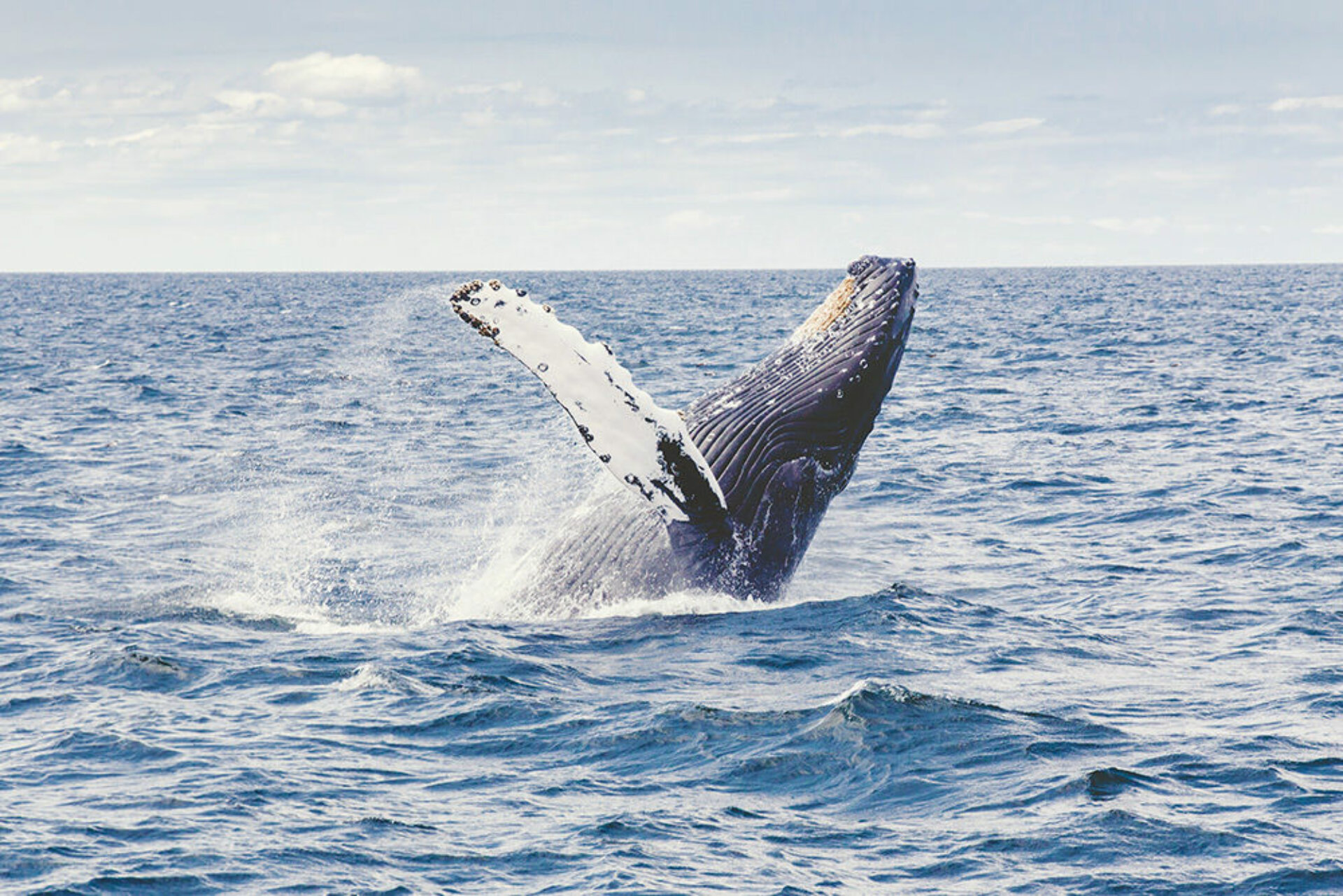