The Best Rock Climbing Spots Around Our Hostels

Here in Montreal, even your next door neighbour and your favourite barista are rock climbers (leaving the rest of us mortals ruminating jealously about their amazing bodies). Rock climbing centres are popping up like mushrooms in a lush forest. They often give a second life to old abandoned buildings like silos or theatres. This trend is not unique to Montreal. In cities around the world, climbing is becoming the new yoga.

"In cities around the world, climbing is becoming the new yoga"

But it’s summer, which just began and somehow is already almost over, so why not try the real deal and hang off a cliff to discover amazing views? Here are some of the most beautiful spots from coast to coast to get started in this new trend.

Almost two-and-a-half hours away from Fredericton, Cape Enrage may seem a little far, but the experience is worth it. You can climb an 18-metre wall or rappel down a 46-metre cliff. What’s so special about Cape Enrage? It’s in the Bay of Fundy, where the greatest tides in the world occur.

"You may find yourself deep-sea diving"

Twice a day, the water level changes by 16 meters. No, it’s not a typo. So it’s important you check the right time to go, because if you're not at the top at the right time, you might find yourself deep-sea diving.

The cliffs at Saint-André-de-Kamouraska, about 20 minutes from Rivière-du-Loup, are among the best climbing spots in the country. The 120 different routes offer options for all levels, and beginners can take advantage of SEBKA guides while they get acquainted with the sport.

"The descent brings you directly - and conveniently - to the microbrewery"

The climb reveals one of the most beautiful regions in Quebec, with a view of the Saint Lawrence River stretching all across the horizon. The descent brings you directly - and conveniently - to the microbrewery La Tête d’allumette, where you can admire the beautiful sunsets on the river with a delicious cold beer in your hand.

If you don't have time to make it to beautiful Bas-du-Fleuve, you can visit the Montagne d'Argent close to Mont-Tremblant in the Laurentians. Open all year, the mountain offers good granite to climb in the summer and quality ice climbing in the winter.

Southern Ontario is not particularly rocky, but it’s traversed by a 750-km-long cliff, called the Niagara Escarpment, where fossils are still being found to this day. And yes, it’s thanks to this formation that the famous Niagara Falls exist. Unfortunately, there’s no place to climb by the Falls themselves. Most of the rock climbing areas are near Toronto or up north, by the stunning Georgian Bay. Most paths are easy and perfect for a day trip. 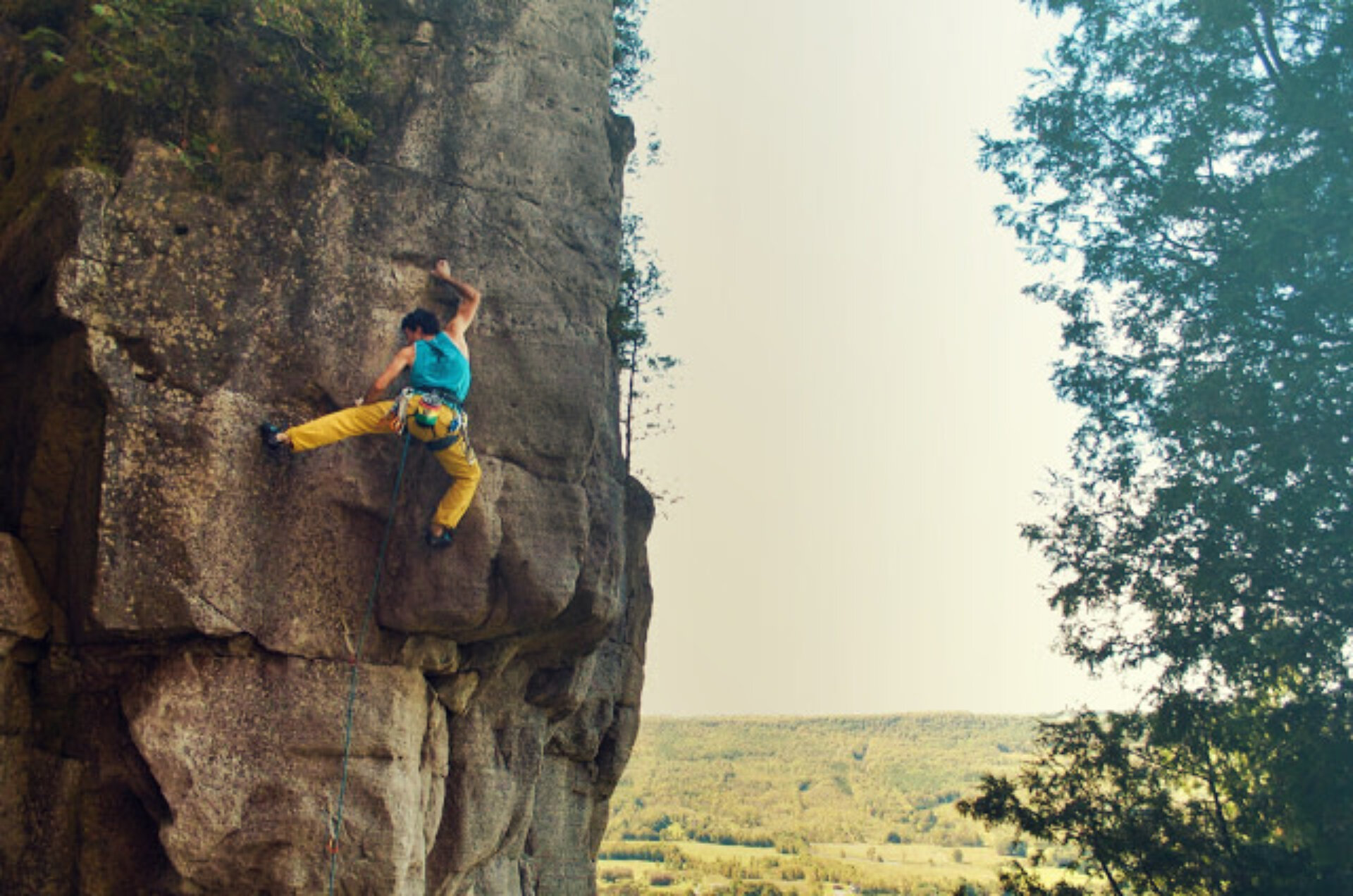 Western Canada is a mountain-lover's paradise. It’s not particularly hard to find a climbing spot here. But one place that does stand out is Squamish, British Columbia, also known as the national capital of rock climbing. This quaint little town, situated between Vancouver and Whistler, lies at the bottom of a fjord. Walls for all levels of climbers are available less than 10 minutes from the town centre. Ideal for travellers without a car! The Stawamus Chief mountain, also known as “The Chief,” is indisputably the most popular peak in the region and is visible from everywhere.

"Ideal for travellers without a car!"

This 700-metre-high granite monolith is no doubt your first stop and absolutely worth the effort. The views from the summit are unbelievable. If you are intimidated by it, don't worry! The climbing community in Squamish is large, welcoming and reaches all the way to the hostel, where Jon will be more than happy to help you find the right climb for you! 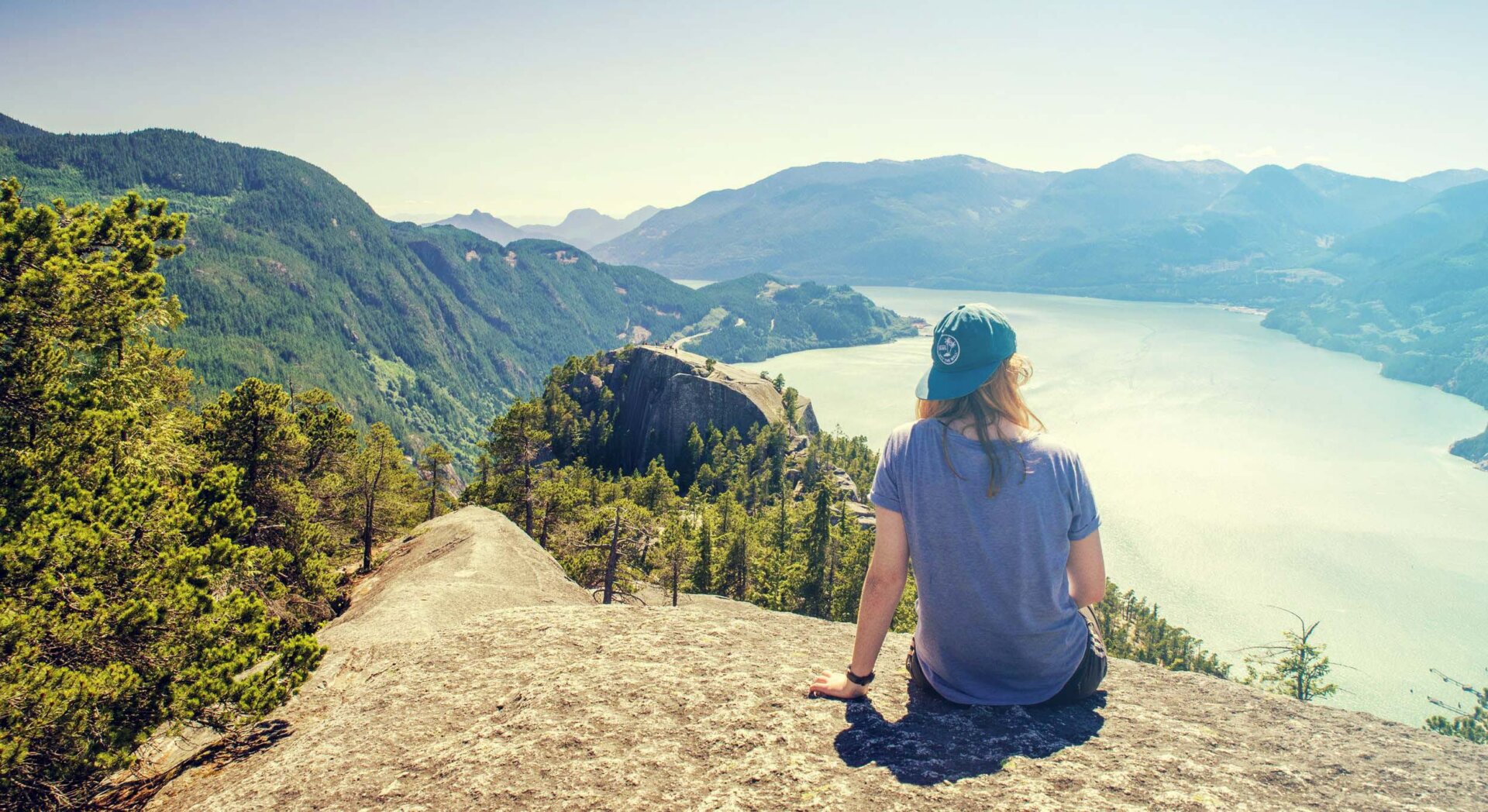 We say that technology makes the world seem smaller. Still, nothing puts humanity’s smallness into perspective like the view from a mountain. Not to mention that as you climb, your Instagram account will also reach new heights.